The two-day training evolution focused on the safety and ship-to-shore capabilities for both the Marine Corps and Navy, as part of a larger training plan to refine tactics ​and doctrine for amphibious operations.

“The safety of our Marines and Sailors is a top priority, especially as we continue to test the capabilities of the newest Marine Corps platform. The Sailors and Marines involved have received extensive training on the operation of the craft, providing the Navy and Marine Corps team the opportunity to rehearse together for real-world events.”

During the evolution, the ACV demonstrated its survivability, maneuverability, and robust swim capabilities by participating in a series of open-ocean swims between Anchorage and Marine Corps Base Camp Pendleton, Calif. Anchorage and designated safety boats remained in close proximity of the ACVs throughout the entirety of the amphibious operations, ensuring safety in all aspects of training.

“As we strengthen naval warfighting as a force and pivot to operating in a contested littoral environment, conducting safe, realistic training on this platform advances our ability to respond swiftly to global threats in austere maritime conditions. The Amphibious Combat Vehicle is purpose-built to provide expeditionary lethality for Marines on the move.”

The Marines with 3D AABN, 1stMarDiv worked alongside Anchorage’s crew to successfully demonstrate the ACVs ability to launch and recover from the well deck.

“This underway period is a true testament of the rigorous training our Sailors and Marines are doing to prepare for ACV waterborne operations,” said Baze. “They spend countless hours preparing, which is evident in the professional manner in which they conducted themselves throughout this evolution. I could not be more proud of each and every one of them.”

The ACV is an eight-wheel drive, armored vehicle with open-ocean capabilities and land mobility. It’s a unique combination of previously-fielded amphibious vehicles and new technological advances to the fleet’s capabilities. The ACV’s ability to use the ocean and waterways to carry Marines and equipment provides expeditionary readiness to Marines on the move, wherever their mission takes them, across a variety of operating environments.

1stMarDiv is the oldest, largest, and most decorated division in the United States Marine Corps, with a combat-ready force of more than 22,000 Marines and Sailors. Headquartered at Camp Pendleton, California, the division is prepared to deploy as a scalable ground combat element structured to defeat peer, near-peer, and hybrid threats across the range of military operations.

Anchorage is a San Antonio-class amphibious transport dock homeported in San Diego. The ship is the seventh ship in its class and was commissioned in her namesake city May 4, 2013. She is the second ship of the U.S. Navy to bear the name. 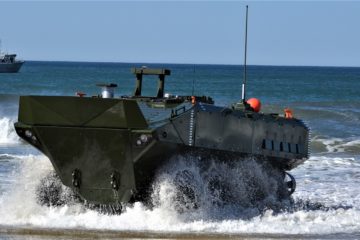