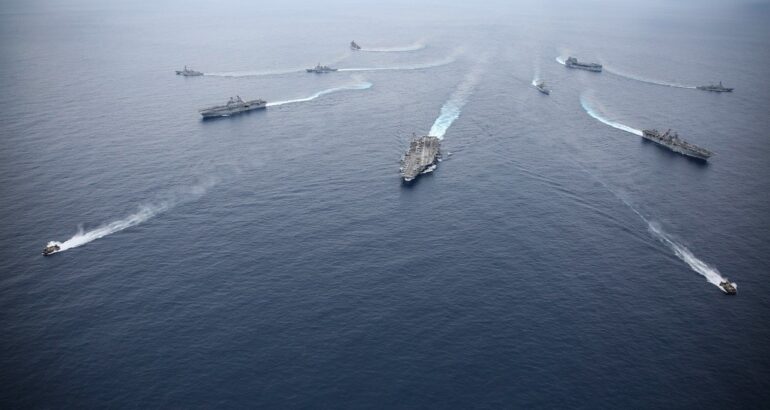 At the WEST 2022 Conference in San Diego, held mid-February, the U.S. Navy Chief of Naval Operations, Admiral Michael Gilday said that he would like a future naval force of over 500 manned and unmanned ships. The 500-ship count will include 12 carriers, nine L-class “Big deck” amphibious carriers, 19-20 amphibious assault ships, about 60 destroyers, 50 frigates, 70 attack submarines, 12 ballistic missile submarines, 30 Light Amphibious Warships, the Littoral Combat Ships (LCS), 100 support ships, and 150 unmanned vessels. However, Naval News asked a question beforehand in mid-January at the Surface Navy Association 2022 that might alter these numbers and ship types.

The “over 500-ship count” stated by U.S. Navy Chief of Naval Operations (CNO), Admiral Michael Gilday is a response to peer nation challenges, namely stemming from Russian and Chinese navies and their armed forces buildups, and also reflects a changing world where the United States shifts from counter-terrorism operations in Central Asia and the Middle East region to the peer nation challenges of the Indian-Pacific (INDO-PACOM) region and the Arctic.  As the United States Navy’s (USN) Fleet ages, replacement ships are required to replace the upgraded Legacy vessels, and the fast shipbuilding rate of the Chinese Navy is also a concern and driving factor for the “over 500-ship count” that readers can read here and here.

The U.S. Navy ship count includes all the newer combat vessels reported and covered by Naval News, such as the Constellation-class frigate, Large Unmanned Surface Vessels (LUSV) and Light Amphibious Warship (LAW), DDG 51, and stealthy Zumwalt destroyers, and the Littoral Combat Ships (LCS). Other ships such as the two aging Hospital Ships, and the EPFs, in addition to Fleet Oilers are also in the CNO’s “500 Ship Count mix.”

The U.S. Navy is poised to add 45 Battle Force Ships in the coming years as described here.

Readers can learn more about the WEST 2022 Conference and news disclosure here.

At the Surface Navy Association Symposium 2022, held mid-January 2022, Naval News asked U.S. Navy CNO Michael Gilday an unusual question at the very end of his presentation: Why build new frigates if a new cheaper, lighter, and less-capable Aegis destroyer class might suffice for future challenges better than a frigate?

“…So we want to buy both, okay? (`You wanna buy both?’ asked the moderator). We’re optimizing the capacity [of] the industrial base.  I’d love to be able buy as many ships as they can generate, but it’s got to be a navy we can afford, right? So that has always been my message with respect to Readiness and modernization and capacity. It’s going to be a navy that we can sustain.”

Admiral Gilday went on to state that the U.S. Navy used to have “10,000 gap issues” at sea a year ago and is now below 3,000 gaps according to a Fleet Master Chief of Fleet Forces.  “We spent a lot of time and money to drive down those gaps to fill supply rooms with supplies and spare parts and we’re still not satisfied to where we are to fund ammunition so we’re sending ships out on deployment with inadequate loadout.  Those are the things that we have to sustain.”

So what will the future U.S. Navy Surface Force look like, and what could Admiral Gilday possibly mean by wanting “both” a mini-destroyer and a frigate?

The Constellation-class frigate is covered by Naval News as stated above, but a mini-destroyer lighter, cheaper, and smaller than the DDG 51 Arleigh Burke-class?  Does such a destroyer design even exist?  In fact, they do.

The Japanese Maritime Self-Defense Force (JMSDF) mini-destroyer, Akuzuki-class, in which four exist and were built from 2009-2012, cost roughly the same as the Constellation-class frigate (give or take tens of millions of dollars). The JMSDF has a mix of Aegis-derived large and small modern destroyers.

And the Royal Australian Navy also has a mini-destroyer called the Hobart-class in which three were built from 2009-2020, but these ran into redesign and cost overrun issues, placing them expensively comparable to the U.S.’s DDG 51 in cost for less capability, capacity, and performance.

But why are mini (or light) destroyers important compared to a frigate?  The answer is simple…a destroyer is not a frigate because the destroyer is classified as having better systems, armament, performance, capacity and capabilities than a frigate.  Even a light destroyer has systems above that of a frigate, meaning the Constellation-class frigate will not match the performance and specifications of a mini-destroyer.

A footnote, there exist some heavily-armed frigate designs, such as the Thyssenkrupp Marine Systems (TKMS) MEKO A-300 frigate, that can match or even exceed the firepower, features, and capabilities of a mini-destroyer. The MEKO has 64mm/2.5-inch VULCANO bow gun, 32 Mark 41 VLS cells, 2 RIM-116 RAMs, triple-mount torpedo tubes, 2 35-40mm remote gun systems, and 16 Anti-ship missiles, comparable or even superior firepower to the USN’s Constellation frigate and JMSDF Akuzuki and Australian Navy’s Hobart-class light destroyers.  However, no information was provided as to the cost of the MEKO A-300, and it is believed to be expensive.

For sure, the U.S. Navy will be pressing hard to fund the next-generation future destroyer, the DDG(X). With far-future DDG(X) upgrades of a larger and more capable Aegis radar and plug-in hull modules for command and control, computers, and additional VLS cells, the DDG(X) might match or even exceed the Air Warfare Defense Boss capabilities found inside the Ticonderoga cruisers that ride protective “Shotgun position” to the Navy’s nuclear-powered aircraft carriers.

Speculatively, will this mean that the DDG 51 class might “fade away” (the Arleigh Burke design has been maxed out in capacity) in favor of acquiring the DDG(X), and a newer lighter cheaper destroyer, and the Constellation-class frigate?  That future acquisition plan concept is unknown and unclear, but CNO Admiral Gilday just told the SNA 2022 moderator in mid-January 2022 that the notion of buying a lighter cheaper destroyer design and the new FFG 62 frigate is indeed possible for the future U.S. Navy Fleet.

US Navy sets out capability imperatives for DDG(X)

Dr Lee Willett 19 Jan 2023
The US Navy (USN) has defined core capability imperatives that are driving development of its next-generation guided-missile destroyer (DDG), to be delivered under the DDG(X) programme.

Peter Ong 10 Jan 2023
Naval News reached out to the RAND Corporation for comments, and opinions on the US Navy’s next-generation destroyer program, DDG(X).