Presented at the Surface Navy Association’s 2022 National Symposium (SNA 2022), held LIVE in-person and streamed virtually on the week of January 10, 2022, the U.S. Navy’s Program Executive Office (PEO) Ships briefed reporters on the preliminary details for the next-generation destroyer, the DDG(X), the successor to the Arleigh Burke-class DDG 51 Flight Three destroyers. Still in pre-design stages, the information and design of the DDG(X) is subject to change over time; however, the U.S. Navy does want an Integrated Power System (IPS) and Baseline Capabilities of evolutionary technologies rather than revolutionary technologies to minimize construction risk.

“That is what DDG(X) plans to do—we are going to execute an evolutionary [versus] revolutionary technology incorporation process. So the DDG(X), the first ship, will focus on a new hull form and a new Integrated Power System.  We will use the proven combat system from the [DDG 51] Flight Three ship so we are designing the [DDG(X)] ship with the flexibility and the margins to accommodate the future of the Navy, and the needs, and where we’re going.”

Kate Connelly, the Deputy Program Manager for the DDG(X)

The DDG(X) information reveal was first reported by Sam LaGrone of USNI News.

According to Rear Admiral Paul Schlise, U.S. Navy, Director, Naval Surface Warfare Division (N96) at SNA 2022, DDG 51s will have been in production for over 40 years with basically the same hull that the U.S. Navy started in 1985.  That includes 30 years of DDG 51 upgrades from Flight One to Flight Two to Flight Two Alpha (2A) and now Flight Three variants and the DDG 51 hull form is maxed-out.  The longer-range weapons cannot fit on the DDG 51 hull form, hence the pursuit of DDG(X).

Kate Connelly, the Deputy Program Manager for the DDG(X) program gave a presentation on the key features of the next-generation successor to the DDG 51 Arleigh Burke-class destroyers that will grow out of their capabilities as new and future threats arise.

“So when we upgraded the Flight [III], upgraded the [DDG] 51 to the Flight Three capability, we took up all of the service life allowance on that platform. So all of the space [and] power has all been allocated.  There is not enough room on that ship to put a new combat capability that takes more power or a larger footprint within the ship,” said Connelly.

“DDG 51 Flight Three is going to be in the fleet through the [20]60s.  So the threat is going to continue to evolve.  And there will be new threats out there. We on the Navy side will continue to evolve our combat and other capabilities to deter the threat. And we will need a platform that can accommodate those new technologies.”

Kate Connelly, the Deputy Program Manager for the DDG(X)

Connelly continued, “So capabilities that we’re gonna [sic] need for the 21st century to continue combating the threat are increased missile capability, sensor growth, directed energy weapons, which actually require a lot of power, increased survivability and increased power availability, which is going through an IPS system (integrator power system), which would provide a lot of flexibility to how you utilize power across the ship and also offer efficiency; and we are also looking at having a reduced impact on the command logistics.”

When it comes to new technologies for the DDG(X), Connelly said, “The first step will minimize incorporation of new technologies. New technologies will be monitored when they are fully mature and ready to actually be implemented—we will put them on the ship—but not until then. We are trying to reduce risk as much as possible.”

“DDG(X) will probably be the most complex ship that we put in the water.  It will be a new hull form, but we’re leveraging existing systems.”

According to Connelly, in December 2020, the Chief of Naval Operations (Admiral Michael Gilday) approved some of the top-level requirements for the DDG(X).  When compared to the DDG 51 destroyers, these DDG(X) requirements are:

During the DDG(X) session’s Question and Answer with the Media, the DDG(X) Program Office admitted that the new hull form has not been finalized and is just a concept, meaning no decision has been made on if it will be a tumblehome hull (just like the Zumwalt-class destroyers) or a flared monohull.  The graphical image is just a notional conceptual design.

During SNA2022, Naval News reached out to the U.S. Navy’s Chief of Information (CHINFO) Office and to the Naval Sea Systems Command (NAVSEA) with questions regarding the DDG(X) specifications, design choices, armament fit, and for clarification on the pre-draft concept design graphic above.  NAVSEA replied immediately saying that all the publicly released information on the DDG(X) was presented at SNA2022 and that NAVSEA has no further information to add.  CHINFO has not replied to Naval News’ inquiry.

For speculative discussion purposes, the preliminary draft concept design shows a sharply raked new hull form for the DDG(X) with a bulbous bow that might contain a sonar.  No mention of a towed sonar array was included in the graphic at this pre-decisional stage.

Stealth plays a huge role in the DDG(X)’s design with the superstructure angled to deflect incoming radar waves and the mast enshrouded.  The ship’s lines are very clean and the superstructure and deck are free of equipment clutter that may contribute to increased radar signatures.

The notional DDG(X) design calls for 14-foot AN/SPY-6(V)1 Aegis radars with the possibility of upgrading to an 18-foot-tall Aegis radar in the future.  Two Aegis radars are positioned on the forward and rear superstructure for a total of four arrays for 360-degree radar coverage.

The DDG(X) appears to have a 5-inch gun turret forward and set further back from the bow than the DDG 51.  The VLS cell count starts with a 32-cell VLS bank at the bow that can be upgraded to twelve large missile cell launchers in the future for accommodation of Conventional Prompt Strike (CPS) hypersonic missiles or future longer-range missiles that have dimensions larger than the Mark 41 VLS.  The exact number of VLS cells so far is undetermined since certain DDG(X)s may be lengthened to accommodate more VLS cells, meaning no two DDG(X)s may be alike. Interestingly, the rear VLS cell bank has moved to amidships similar to the Chinese People Liberation Army Navy’s (PLAN) Type-055 Renhai-class destroyers. NAVSEA declined to comment to Naval News’ inquiry seeking a reason for this Vertical Launch System (VLS) placement decision.  Naval News can speculate that the Destroyer Payload Module (DPM) “plug-in” option can increase the VLS cell count and mix-and-match different types of VLS designs (for larger missiles) if more DPMs were added to that section where the rear VLS cell bank will be located.

The same DPM option can be custom-designed for Special Forces’ berthing and equipment, or Anti-Submarine Warfare (ASW), or a whole host of specialized mission roles. Once the custom DPM is inserted during construction, it will remain fixed in place as part of the lengthened hull, thus rendering the ship’s name of that DDG(X) a specific extended role unknown to potential adversaries unless released as public information.

The tall bridge superstructure can mount Future Planar Arrays (FPA) on the front face that may prove useful for Early Warning, Electronic Countermeasures Warfare (ECM), self-defense, Signals Intelligence (SIGINT) gathering, C5ISR, Anti-UAS, or for controlling UAS.  With the FPA and a DPM installed with UAS control consoles, the DDG(X) could hypothetically control more unmanned drones for the U.S. Navy than any other warship in the fleet.  The U.S. Navy needs a dedicated UAS ship control console room, and the U.S. Navy currently lacks this, except for UAS consoles in 40-foot shipping container modules that can be placed in Littoral Combat Ships and Expeditionary Sea Bases.  Also, hypothetically, the FPA can contribute to the Air Warfare Defense Boss role with a DPM acting as a dedicated Air Warfare Combat Information Center (CIC), a role often devoted to the aging Ticonderoga-class cruisers that ride shotgun to the Navy’s nuclear-powered aircraft carriers because the current DDG 51s lack the space and capability for the Air Warfare Boss.  DDG(X)s with an Air Warfare Boss CIC DPM installed can remedy this space issue, and the larger 18-foot AN/SPY-6 Aegis radar arrays and DPMs for more VLS cells in the future can make up for the Ticonderoga cruiser’s Air Warfare Boss role.

It is unclear on if there are any torpedo tubes, either deck-mounted or in a dedicated torpedo room as standard armament fit, although the VLS cells should accommodate VLS ASROC.  The DPM option appears to label two Surface Vessel Torpedo Tubes (SVTT), but it is unclear what type and specifications these SVTTs will be (the current U.S. Navy ship standard is the Mark 32 triple-mount SVTT), and if the DDG(X) requires the ASW DPM to be installed to have torpedo tubes as part of the DDG(X)’s armament package.

Naval News Staff 23 Jul 2022
Ingalls Shipbuilding has been awarded a cost-plus-incentive-fee contract for engineering and design from the U.S. Navy for the next-generation guided-missile destroyer (DDG(X)) program. 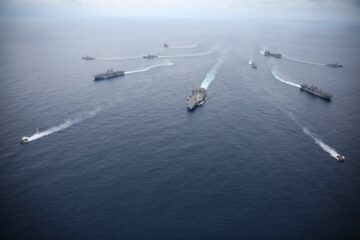 Peter Ong 10 Mar 2022
At the WEST 2022 Conference in San Diego, held mid-February, the U.S. Navy Chief of Naval Operations, Admiral Michael Gilday said that he would like a future naval force of over 500 manned and unmanned ships.