“Due to our competencies and major experience in military projects we would like to build a series of big amphibious assault ships, which the Russian Navy needs,” Ilya Samarin said.

Slipways will be freed in the first half of 2022, as ships are floated. “To rule out idle time and ensure a rhythmical load of production facilities, we are working to attract new orders,” he noted.

Samarin also stressed that the shipyard plans to build a hull processing workshop and a floating dock in the near future. The modernization of production facilities is progressing successfully at the enterprise.

“We are completing the first stage of modernization — technical re-equipment of two major facilities. Over 200 modern tools were procured. The modernization increases our competitiveness and productivity, as well as working conditions.”

Yantar is building two amphibious assault ships for the Russian Navy and two frigates for India under Project 11711. The shipyard made takes over some orders from Severnaya Verf Shipyard damaged by fire.

These two ships, Vladimir Andreyev and Vasily Trushin were respectively laid down on the 23rd of April 2019 with expected commissioning by the Russian navy in 2023 and 2024 respectively. They are an improved version of the first two ships of the class, Ivan Gen and Pyotr Morgunov, which were commissioned in June 2018 and December 2020.

The evolved design features an increased displacement of 7,000 to 8,000 tons compared to the 6,000 of the previous subclass. They will feature a large superstructure to allow for increased deck space. This allows them to accommodate up to four helicopters with the capacity to operate two of them simultaneously.

To allow for all of these increases in capacity and dimensions, the new subclass will be equipped with more powerful engines with four 16D49 diesel engines as opposed to the previous 10D49 model.

These new ships and the Ivan Gren class as a whole, are a central aspect in the modernization program of the Russian navy’s amphibious fleet. Mainly composed of old assets from the cold war, important efforts have been made in the shipbuilding sector to assure future capabilities. 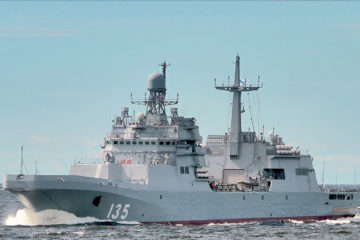 Russia’s Project 11711 Amphibious Ships can be Used as Minelayers

Naval News Staff 28 Oct 2021
The Project 11711 large amphibious assault ship can be used as a minelayer that will be able to deny access to any strait zone and a whole offshore zone via sea mines.