The US Air Force Research Laboratory has released a video of the QUICKSINK concept, which proposes an unique way to sink enemy vessels by employing a seeker-fitted Joint Direct Attack Munition (JDAM).

According to the footage, an F-35 jet fighter carrying seeker-equipped munition (like Joint Direct Attack Munitions (JDAM)) flies for the routine maritime patrol task. A P-8 Poseidon maritime patrol aircraft detects and identifies a cargo ship armed with long-range ballistic missiles, and then guides the F-35 to the area of the threat.

When the F-35 detects the so-called cargo ship, it fires an all-weather marine seeker-enabled munition that flies to the target’s coordinates. After approaching the target, the seeker tracks its velocity vector and neutralizes it by exploding beneath it, much like a torpedo.

Key to the demonstration is the Air Force Research Laboratory’s development of a Weapon Open Systems Architecture (WOSA) seeker for precision targeting of maritime surface vessels at low cost.

This JCTD uses a Joint Direct Attack Munition (JDAM) integrated with the new seeker to rapidly demonstrate the capability at minimal costs. The WOSA seeker also allows the technology to be included in a variety of current and future weapons systems and enables them to engage static and moving maritime targets.

QUICKSINK is not a mine and is intended to have an immediate effect on stationary or moving maritime targets.

On August 26, 2021, the USAF performed an airborne test as part of the QUICKSINK Joint Capability Technology Demonstration, which was supported by three F-15E Strike Eagles carrying JDAM from the 85th Test and Evaluation Squadron.

Why Is It Important?

Torpedoes, such as the heavyweight MK-48, are still the principal technique of sinking enemy ships. New QUICKSINK methods may be able to achieve the same level of anti-ship lethality using air-launched weapons, such as modified 2,000-pound class Joint Direct Attack Munition precision-guided bombs.

A Navy submarine has the ability to launch and destroy a ship with a single torpedo at any time, but QUICKSINK JCTD aims to develop a low-cost method of achieving torpedo-like seaworthy kills from the air at a much higher rate and over a much larger area. This new capability will provide combatant commanders options to neutralize surface maritime threats and demonstrate the inherent flexibility of the joint force.

QUICKSINK exploitation of WOSA drives down the cost of the most expensive part of the weapons system and provides the modularity and ability to plug-and-play different manufacturers’ seeker components to further reduce costs or enhance performance.

QUICKSINK is an answer to an urgent need to quickly neutralize massive maritime threats over massive areas around the world. QUICKSINK is unique in that it can provide new capabilities to existing and future DoD weapons systems, giving combatant commanders and our national leaders’ new ways to defend against maritime threats.

The brand-new project proposes a futuristic concept for destroying enemy targets. As previously said, the most important aspect of this weapon is its low cost. Because the killing mindset of this weapon is comparable to that of torpedoes, which may destroy a ship with a single shot. However, it is a less expensive option than torpedoes.

Of course, the launcher platform’s attitude differs between torpedoes and the QUICKSINK weapon. The F-35 jet fighter, according to the video, drops a bomb from a high altitude, whereas naval air assets must maintain a low altitude while firing a torpedo. Because the diving location and angle of the torpedo are important to the engagement’s success. While naval air assets launch torpedoes from a distance, the JDAM-like munition splashes in the water close to the target.

The CONOPS and effectiveness of this novel munition would be best evaluated after testing it in various scenarios. 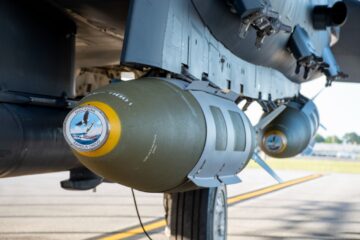