Home» News»Loss of Russian Cruiser Moskva: What we know so far 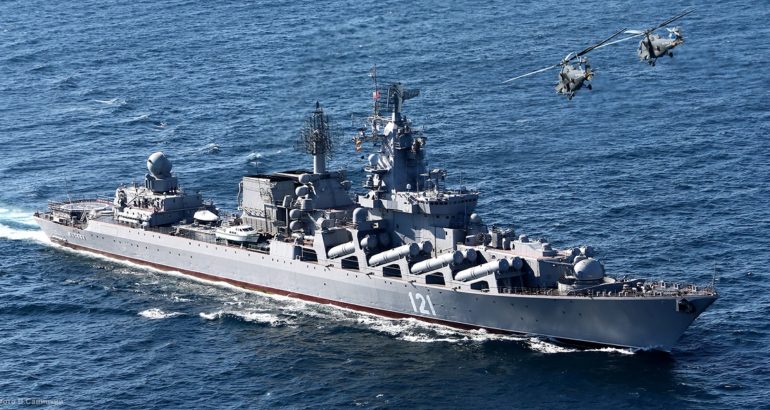 Ukrainian forces reportedly attacked the flagship of Russia's Black Sea Fleet, the Slava-class cruiser Moskva, causing significant damage aboard the vessel. Russian news agencies confirmed the damage. Below is what we know so far about the Moskva incident.

Story by Tayfun Ozberk with additional reporting by Xavier Vavasseur

On the evening of April 13, rumors surfaced on social media that Ukrainian forces had attacked the Russian cruiser Moskva and caused severe damage on board the ship. In the beginning, people were skeptical of this assertion because of similar (but unverified) previous claims about Russian Navy ships hit by Ukrainian fires. Patrol cruiser Vasily Bykov and Frigate Admiral Essen were rumored to be damaged but such rumors turned out to be not true.

At midnight, several Russian media outlets, including state-owned RIA Novosti and the TASS agency, confirmed an explosion aboard the Moskva cruiser. While the Russian Ministry of Defence didn’t release a statement on this incident, the source of the Russian media was the Defence Ministry.

According to RIA Novosti, Moskva suffered a detonation from its own ammunition, and the crew was completely evacuated. TASS Agency shared similar statements to define the reason as “a blast of ammunition”.

“A fire and subsequent munitions blast have caused serious damage to the Moskva missile cruiser of the Russian Black Sea fleet, the crew was evacuated, the Russian defense ministry said on Thursday.”

Given Ukraine’s claims and the Russian media statements, it is assumed that the cruiser Moskva was hit by a long-range missile. An official statement about what weapon was used to fire the missile is not yet available, but according to a statement by the governor of Odesa circulating on social media Telegram, Ukraine hit the ship with its locally designed and manufactured Neptune anti-ship missile.

The Neptune missiles were to be delivered to the Ukrainian Armed Forces in April 2022. Ukraine’s need for coastal missiles has always been an issue since the beginning of the war, but Ukraine hasn’t deployed these missiles even though Russia’s Black Sea Fleet has operated near its territorial waters and fired land-based missiles. According to many experts and analysts, the delivery schedule was interrupted due to the war, and Ukraine doesn’t have an anti-ship missile capability in its arsenal. At a time when Ukraine and the United Kingdom have been holding talks on the delivery of anti-ship missiles to Ukraine, the attack on the Moskva turns out to be a surprising incident.

Another claim made by the Ukrainian media was that TB2 Bayraktar drones were used to distract the Russian cruiser and launch the anti-ship missiles at Moskva when it was busy pursuing the Turkish-made UAV. This claim seems unrealistic, as the Moskva had the capabilities to deal with multiple threats.

The Moskva was not only the flagship but also the most powerful ship of the Russian Black Sea Fleet in terms of weapons and sensors. She came out of a maintenance period in 2020. She took the lead of the fleet since the beginning of the war, played a key role in the capture of Snake Island, and supported the show of force of the amphibious units.

The size of the damage and the current condition of the cruiser is not visually verified, but the available evidence strengthens the possibility that the ship sank. The most important piece of evidence is the evacuation of the crew. A warship may be abandoned if it is deemed impossible to save the ship and further efforts would be futile. This decision may be made by the ship’s commanding officer, and the crew abandons the ship with life rafts. Therefore, the evacuation of the ship is a clear indication that the ship has begun to sink shortly before the evacuation.

If confirmed, the loss of Moskva is undoubtedly the most significant casualty of Russian forces since the beginning of the war. The loss of such significant warships usually triggers a national trauma, and the name of the ship, which stands for the capital of Russia, intensifies the psychological effect. The loss of a warship is quite different from that of other assets, as the ships are considered part of the countries’ mainland, but the name and the role of the Moskva increase the signitificance of the loss.

This incident also highlights failures of the Russian military intelligence which didn’t detect an anti-ship missile capability gained by the Ukrainian Armed Forces in the midst of the war.

Despite the earlier loss of an Alligator-class LST, the Russian fleet operated unrestrictedly in the Black Sea until now. There was no resistance and no threat to the warships, so Russian warships dared to enter Ukrainian waters and patrol near Odesa. After this incident, Russian warships would be more cautious in their operations in the Black Sea and maintain standoff distance from Ukraine’s coast to avoid entering the A2AD (Anti Access-Area Denial) area, which is established by anti-ship missiles.

In addition, while two more cruisers of the same class are still sailing the Eastern Mediterranean, using these to reinforce the Black Sea Fleet is not an option as the Turkish straits are still closed.

Russia could try to retaliate in the form of a heavy airstrike on Odesa to neutralize Ukraine’s ability to attack warships from land. But this would be admitting that its flagship was lost to Ukrainian fire.

It is certain that new developments are in store after the Moskva incident. Meanwhile it marks a major event in modern naval warfare as it is the first cruiser lost in battle since the Falklands war and the sinking of ARA General Belgrano.

Pentagon spokesman John Kirby said on CNN that the warship Moskva is still afloat but clearly damaged. He said it remains unclear whether the damage was caused by Ukraine missile attack

According to Russian state media Ria Novosti, quoting the Russian Ministry of Defense:

“During the towing of the Moskva cruiser to the port of destination, due to damage to the hull received during the fire from the detonation of ammunition, the ship lost stability. In the conditions of stormy seas, the ship sank,”

The report appears dubious because the conditions in the Black Sea today at 17:00 local time were nowhere near “stormy” with wind speed of 14 knots and wave height of around 1 meter:

Outplayed By Ukraine: What Is Next For Russia’s Navy In The Black Sea?

H I Sutton 19 Dec 2022
When the invasion started, it was unthinkable that the Ukraine would have the mighty Russian ...