U.S. Navy Chief of Naval Operations Admiral Michael Gilday at the Center for Strategic and International Studies (CSIS) webinar held on April 28, 2022, answered a question posed by Naval News on the status of the Anti-Submarine Warfare (ASW) and Mine Countermeasures (MCM) Mission Modules for the Littoral Combat Ship (LCS).

With the exception of the Anti-Surface Warfare (ASuW) Module that is currently fielded, the other two Mission Modules have had their share of issues and program delays. The reason for the ASW and MCM Mission Modules is that the LCS lacks the installed weapons and equipment to conduct ASW and MCM missions without these Mission Module components.

Naval News: With the early decommissioning of [some of the early] Freedom-class LCSs [Littoral Combat Ship], do you think that the littoral MCM [Mine Countermeasures], Surface Warfare, and ASW [Anti-Submarine Warfare] tasks requirements are fulfilled, or is another new littoral combat ship design required?

Admiral Gilday: The [Constellation-class] frigates would be the gap-filler there with respect to ASW.  Those requirements for that ASW package for [the] LCS were developed back in 2008 against a diesel [submarine] threat in the littorals.  And then our minds shifted to we’ll be using these things in the deep blue ocean.  First of all, the ASW Modules just didn’t pan out; the VDS [Variable Depth Sonar] didn’t work as it should.  LCS is as noisy as an aircraft carrier and so there are some big challenges there that we should have pick up on way earlier. And for me it got to the point where I’ve been looking at the data on the ASW package for the last year-and-a-half to two years and it got to the point where a decision needed to be made and I wouldn’t put more money against it and that left the future of those ships open.

The MCM Modules are on track to IOC [Initial Operating Capability] either late this Summer or in the Fall, but within the next year, and so we’re in a better path with the MCM Modules, and the Surface Warfare Module has been around since 2019 with IOC.

The placement of the Mission Modules aboard both LCSs can be seen in the photos below.

Naval News has covered the development of the upcoming Constellation-class frigate (FFG 62) that will take over the ASW role for the LCS. While the original FREMM frigate design had a bow sonar, the U.S. Navy opted to remove the bow sonar and use a Thales Variable Depth Sonar (VDS) instead.

The flexibility of the LCS MCM Mission Module means that practical unmanned surface vessels (USV) and unmanned underwater vessels (UUV) can be embarked to provide services for the MCM Module.  Naval News has covered some of the USVs and UUVs being tested for MCM Warfare. 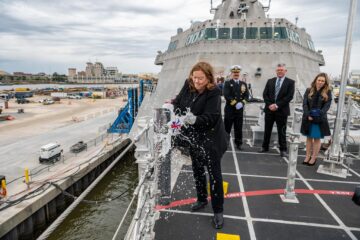