During a presentation last week at an educational facility, Baykar’s CTO Selcuk Bayraktar revealed crucial information about BAYRAKTAR KIZILELMA‘s operational concerns aboard the future TCG Anadolu. He explained that the unmanned jet will take off without a catapult system, and will be secured on the deck with a hook system while landing.

According to an animation video circulating on the social media, KIZILELMA takes off from the ski-jump ramp without the need of a catapult or other external equipment and performs a hard landing at a wide angle of attack with the help of the catch rope, which is also known in naval aviation as STOBAR (Short Takeoff But Arrested Recovery).

While it was clear that the LHD would launch the drones using a roller system on the bow of the ship, it was unclear how the ship would catch up with the drones. After the Baykar chief’s explanations, Selcuk Bayraktar clarified this issue by explaining that the drones would be secured with safety nets. He claimed that the safety nets would be a safety measure, but the TB3 drones would stop on the deck before touching the nets.

The hook arresting system doesn’t appear to be feasible for TB3 drones because of their propeller on the back, but MIUS has no such limitation. Based on the information available, takeoff and landing operations aboard TCG Anadolu would be performed as described in the table below:

As previously reported, after Turkey pulled out of the F-35 JSF programme due to sanctions imposed on it for procuring the Russian S-400 air defence system, the Turkish government decided to convert the future LHD into a drone carrier ship. As a result, Baykar announced in early 2021 that it was working on a specific UCAV called TB -3, an improved and folding-wing version of the combat-proven TB2 drone that would be deployed aboard TCG Anadolu.

Turkey’s top procurement official, Ismail Demir, said in an interview on TV in October 2021 that LHD Anadolu will be capable to house  up to 80 drones and control 10-15 drones simultaneously.

The Turkish Defence Industries Presidency stated in a February 2022 video that the first flight of the TB -3 and drone integration system for TCG Anadolu will take place in 2022.

MIUS will be the second option, along with TB-3, for deploying airpower aboard the TCG Anadolu after it is potentially operational in 2025. MIUS will be deployed on the Anadolu as a light attack aircraft, although the unmanned combat aircraft is projected to conduct a multitude of military actions, such as strategic offensives, close air support (CAS), missile offensives, suppression of enemy air defenses (SEAD) and destruction of enemy air defenses (DEAD), according to Baykar.

Besides, Turkish Aerospace was said to be working on operating Hurjet light attack and jet trainer aircraft on TCG Anadolu. However, while company officials stated that they are in contact with the Turkish Navy for the project and are looking to build a protocol to improve coordination, no announcement has been made.

The Turkish Ministry of Defence announced on 04 March that the Turkish Navy has raised the Turkish flag aboard the TCG Anadolu, making the ship ready to begin testing. The Anadolu began port acceptance trials on March 07 and is scheduled to enter Turkish Navy service by the end of 2022. 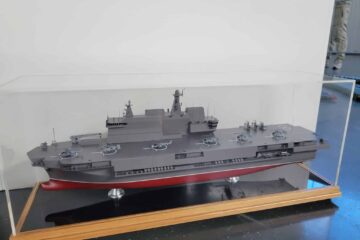