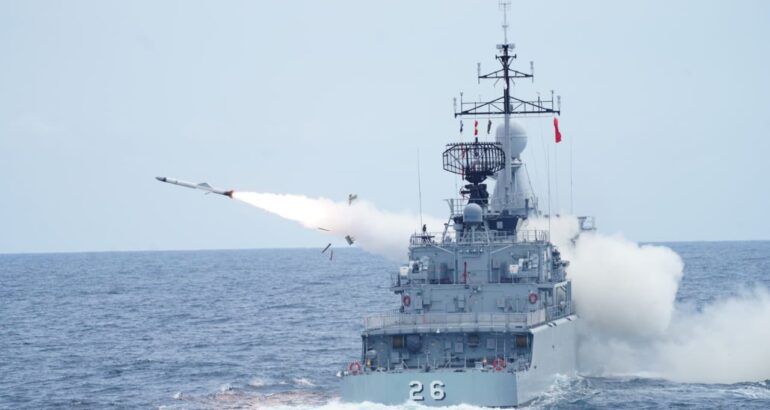 Royal Malaysian Navy ship KD LEKIR live-fired Exocet missile during the 21st edition of the country's largest exercise, Taming Sari 21/2022, which took place between May 16 and 20, 2022, in the north of the Strait of Malacca.

Today, we witnessed the conduct of the exercise TAMING SARI Series 21 of 2022, which includes live missile launches by the Royal Malaysian Navy (RMN) Assets. In addition, this is also the culmination of Operational Sea Training Exercise West (OSTEX WEST) 1/22, which was conducted May 16-20, 2022 with the units of the Royal Malaysian Fleet.

As part of the exercise, an EXOCET MM40 missile was launched by KD LEKIR, a Kasturi-class corvette, in the waters of the Strait of North Malacca. The firing was precisely on the target located at a distance of 20 nautical miles (or 36 kilometers).

The success of firing the missile on the target not only proves the ability and expertise of RMN personnel in handling the country’s defense assets but also highlights RMN’s preparedness in ensuring that the country’s waters remain safe and sovereign.

“If the 10 ASEAN countries could unite to ensure that our priority is our regional security and stability, then no superpowers can belittle us.”

The readiness of the RMN’s missile systems will always be at the highest level, as a new missile system will be adopted as soon as the existing system becomes obsolete during this two-year period.