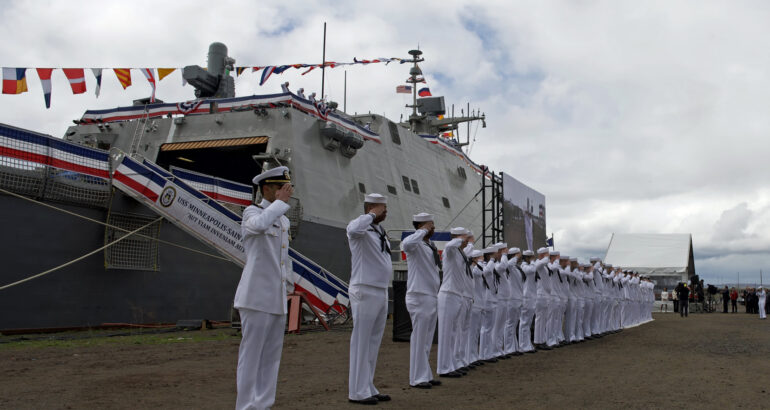 “The strength of America’s national security, and the democratic values we hold dear, are being tested today like they have not been in decades,” said McCollum. “I can think of no two names that represent that strength more than Minneapolis and Saint Paul. Together we are one team – those who built this fine ship, and those who will serve on her. It is the strength and determination of the American people that is the backbone of our national security.”

The Honorable Erik Raven, Under Secretary of the Navy, reflected on attending his first commissioning ceremony. “The Twin Cities represent the Great State of Minnesota’s economic, cultural, and political center. The Twin Cities play a significant role in our nation’s economic network,” said Raven. “Now, more than ever, it is fitting that a Littoral Combat Ship is named Minneapolis-Saint Paul – honoring the legacy of work and contribution of the people whose work ultimately impacts our daily lives nationwide and globally.”

Vice Admiral Scott Conn, USN, Deputy Chief of Naval Operations for Warfighting Requirements and Capabilities also attended. “Thank you all for preparing LCS-21 for this day,” said Conn. “I recognize how special it is to be together for this milestone, and to spend this day bringing the newest ship in our fleet to life in this way. And more so, to do it in the State of her namesake cities is unique and special.”

The Governor of Minnesota, Tim Walz, also attended the ceremony. “This is a unique opportunity to gather ourselves as Minnesotans, and Americans,” said Walz. “We’re not just a country; we’re an ideal.”

Rep. Pete Stauber, Minnesota 8th District, assisted in placing the ship into commission. The ship’s sponsor Jodi Greene, former Deputy Under Secretary of the Navy, gave the first order to “man our ship and bring her to life.”

“As a crew, you have already proven your strength and determination in getting ready for this momentous day,” said Greene. “You prepared this ship to take her place in the fleet during challenging times. All eyes were on you as you continued to make this pathway.”

Built by the Lockheed Martin and Fincantieri Marinette Marine in Marinette, Wisconsin. Minneapolis-Saint Paul was launched and christened in on June 15, 2019. The ship completed acceptance trials, Aug. 21, 2020, and was delivered to U.S. Navy, Nov. 18, 2021.

Minneapolis-Saint Paul is the second naval ship to honor Minnesota’s Twin Cities although each city has been honored twice before.

The first U.S. Navy warship named Minneapolis-Saint Paul was a Los Angeles-class submarine launched in 1983 that participated in Operation Desert Shield/Desert Storm. USS Minneapolis-Saint Paul (SSN 708) was the first submarine to carry Tomahawk missiles specifically designed for use in strikes against Iraq during the Gulf War. Having served for over two decades with distinction, the submarine decommissioned in 2007.

LCS is a fast, agile, mission-focused platform designed for operation in near-shore environments yet capable of open-ocean operation. It is designed to defeat asymmetric “anti-access” threats and is capable of supporting forward presence, maritime security, sea control, and deterrence.

Minneapolis-Saint Paul will be homeported at Naval Station Mayport, Florida.