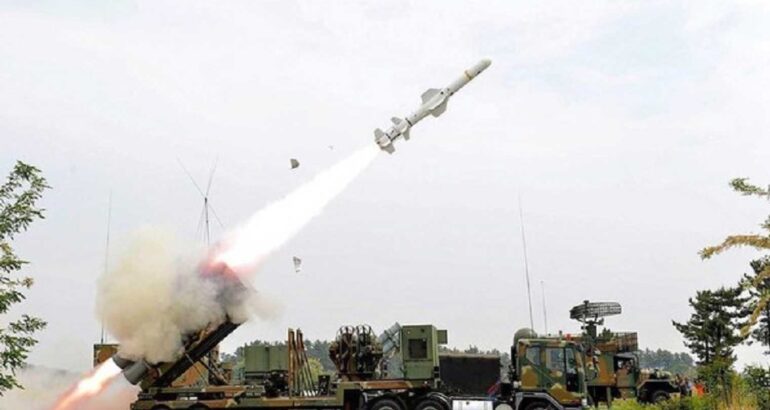 The U.S. is reportedly planning to supply Ukraine with anti-ship missiles to break the Russian blockade off the coast of Odessa.

Several U.S. media outlets claim that the U.S. wants to assist Ukraine with modern anti-ship missiles to counter the Russian naval blockade, either directly or through a European ally that can facilitate the transfer. The assertions are based on statements made by U.S. authorities.

Harpoon anti-ship missile appears in mind when the rumors surfaced, however, it’s not the only option. Naval Strike Missile is another missile on the table.

“Three U.S. officials and two congressional sources said two types of powerful anti-ship missiles, the Harpoon made by Boeing and the Naval Strike Missile made by Kongsberg and Raytheon Technologies were in active consideration for either direct shipment to Ukraine, or through a transfer from a European ally that has the missiles.”

While reports suggest that there may be some technical challenges in deploying Harpoon missiles to Ukraine’s coasts, because Harpoon is mostly used at sea, it is well known that the United States Naval Air Systems Command has awarded Boeing a $498 million Harpoon Coastal Defense System (HCDS) contract for Taiwan in March 2022. Although difficulties in training personnel about the Harpoon Weapon System in terms of tactical use of the missile and maintenance may be considered, technical challenges in deploying land-based Harpoon Systems do not appear convincing.

Another interesting part of the reports is the training time for the Naval Strike Missiles, which claims to operate in fewer than 14 training days. 14 days is a relatively short time to train the crew of the missile system; this could be the duration of the missile’s tactical use education in order to make the missile batteries as soon as possible; technical training, such as maintenance, defect detection, problem-solving, and so on, is expected to take longer.

The Norwegian Ministry of Defense declined to comment on what additional contributions of arms and defense equipment it may consider offering to Ukraine. NSM coastal batteries are currently being used by the Polish Navy.

What benefits can anti-ship missiles provide to Ukraine?

Land-based anti-ship missiles have already proven their effectiveness in the Russian-Ukrainian war. The shocking loss of the cruiser Moskva, which had assumed the role of the flagship of the Russian Black Sea Fleet, clearly demonstrated that such a massive ship can be sunk even with two anti-ship missiles, although there was some negligence in Russian naval intelligence, missile defence, and fire fighting efforts.

After the Moskva incident, the density of Russian naval activity off the Odesa coast decreased dramatically, and a lack of air defence capability resulted in small boat losses from TB2 Bayraktar unmanned aircraft attacks. This was a clear demonstration of the deterrence provided by land-based anti-ship missiles.

Russian Black Sea Fleet assets have been generally operating close to the coast between Donuzlav and Sevastopol. The reason seems to stay safe under the air defence cover of the land-based air defence systems, or the limitations of the RF seekers of the missiles’, which cannot hit the sea targets close to the land.

Harpoon missiles have similar limitations in their Block 1, Block 1C, and Block 1G variants. Due to the “Area of Uncertainty (AoU)” of the RF seeker, once the seeker is turned on, the missile is aimed at a target with a larger radar cross-section. As a result, the probability of acquisition (PACQ) is drastically reduced when a ship is near an island or land. After the Block 2 variant, the missile’s target selectivity was increased by reducing the size of the AoU and equipping the system with GPS to engage near-shore ships and shore targets. However, in GPS mode, the missile goes to a GPS location, so the Block 2 missile cannot hit if the target is warned early and flees from the initial position at full throttle.

Such limitations don’t exist for Naval Strike Missile, which is fitted with IIR (Imaging Infrared) providing strikes with pin-point accuracy even if the target is positioned close to the land. NSM provides an A2/AD (Anti Access/Area Denial) area with a size of more than 185 kilometers, while Harpoon’s range is around 75 nautical miles (~140 km).

Since the beginning of the war, the Russian Black Sea Fleet has established a naval blockade in the approaching area of Ukraine’s ports, especially Odesa. This blockade has cut off Ukraine’s access to the Black Sea, halting Ukrainian grain exports, choking the country’s main export industry and driving global food prices to record highs.

If Ukraine would be able to establish an A2/ AD in this area with land-based anti-ship missiles and conduct successful engagements against Russian naval forces entering the A2/ AD zone, the Russian blockade would likely end and transportation corridors would be opened.

The deployment of anti-ship missiles is a solid step toward strengthening Ukrainian defenses, especially of Odesa, which has been threatened by amphibious assault since the beginning of the war. Apart from the already mentioned advantages of land-based anti-ship missiles, the most important one seems to be breaking the naval blockade, which negatively affects many countries. Undoubtedly, such a step would prompt Russia to take additional measures, and any action is likely to increase the density of war in the north of the Black Sea.