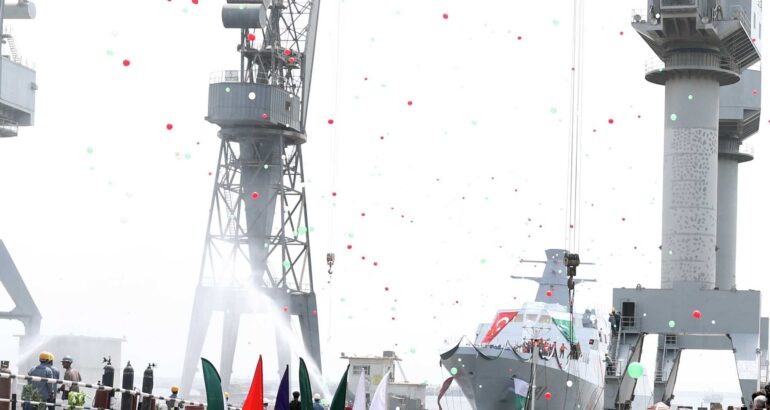 Almost all of the officials who spoke on the occasion highlighted the improving strong bonds and determination to further broaden cooperation, pioneered by the defense industry.

“The MİLGEM-class corvettes will be one of the most technologically advanced surface platforms in the Pakistan Navy. Equipped with state-of-the-art weapons and advanced sensors, including surface-to-surface and surface-to-air missiles, anti-submarine weapons, and advanced command and control systems, these ships will make a significant contribution to the Pakistan Navy’s capabilities.”

During his speech, Pakistan’s Prime Minister Sharif said the launch of the ship was a “moment of pride for the entire Pakistani nation and the naval forces of the two countries.”

The keel laying for this first corvette took place on 1 May 2021 at KS&EW, and she is expected to be delivered to Pakistan Navy in 2023.

In July 2018, a contract was signed between Military Factory and Shipyard Management Corporation (ASFAT) of Turkey and the Pakistani National Defense Ministry Ammunition Production and Karachi Shipyard for the construction of four Milgem class vessels based on Turkish Ada-class design. Turkish defence minister at the time, Nurettin Canikli, described the deal as “the largest defense export of Turkey in one agreement.”

The contract entails the construction of two corvettes in Turkey and two at Karachi Shipyard & Engineering Works (KS&EW). The contract has also provisions for the transfer of design rights and construction know-how from Turkey to Pakistan.

The exact configuration of the Pakistan Milgem-class ships has not been made public yet. During the Aman Naval Exercise held in February 2019, Admiral Abbasi said that Pakistan ships will be fitted with a 16-Cell VLS behind the main gun. It is expected that the Babur-class corvettes will be armed with MBDA’s Albatros NG air defence system and Harbah Anti-ship and land attack missiles.

The propulsion system for all the MILGEM ships consist of one LM2500 gas turbine in a combined diesel and gas turbine configuration with two diesel engines; total propulsion power is 31,600 kilowatts.

Turkey’s Ada-class are multipurpose corvettes able to conduct a wide a range of missions, including reconnaissance, surveillance, anti-submarine warfare, surface-to-surface and surface-to-air warfare.