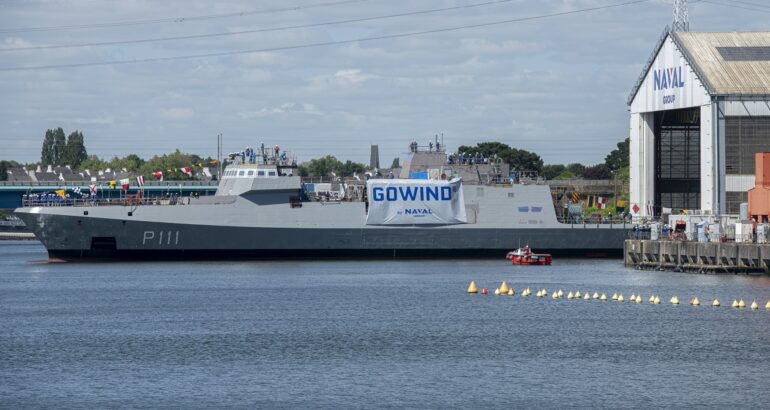 Launch of the second Bani Yas-class corvette for the UAE Navy, Al Emarat, at the Naval Group shipyard in Lorient. Naval Group picture.

The United Arab Emirates (UAE) Navy's new Gowind corvettes will be fitted with VL Mica NG from MBDA in place of ESSM as initially planned. Naval Group launched the second corvette, Al Emarat, on 13 May 2022.

Naval News recently learned from three different industry sources about the selection of the VL MICA NG surface to air missile by MBDA. As reported previously, the initial plan of the UAE Navy was to fit both the ESSM and RAM (both systems by Raytheon) aboard those corvettes.

Contacted in late 2021 about where the integration of ESSM would take place (in France or in the UAE), a Raytheon spokesperson advised Naval News to contact NAVSEA. NAVSEA didn’t get back to us at the time.

With the first ship-in-class, Bani Yas, currently outfitting at the Naval Group shipyard in Lorient following its launch in December 2021, Naval News learned that the UAE ended-up selecting the VL MICA NG following the refusal of the United States to export the ESSM Block 2 missile. Naval News understands the decision may be related to the (now cancelled) construction of a Chinese naval base in the UAE but could not obtain a formal confirmation. According to our sources, the United States were seemingly OK to greenlight the export of ESSM Block 1 but the UAE insisted in procuring the latest, Block 2, variant. Faced with the American refusal, the UAE finally opted for the VL MICA NG. According to our information, the corvettes will also be fitted with RAM (as initially planned).

UAE follows the Egyptian Navy, the launch customer of the VL MICA NG, in selecting this missile for its Gowind corvettes. The VL MICA NG was unveiled during Euronaval 2020. The main evolution of the MICA NG compared to the existing MICA are:

The MICA NG missile will be available in series production from 2026. Until then, the UAE Navy Gowind corvettes will be fitted with legacy VL MICA surface-to-air missiles. The dimensions of the MICA NG munition remain unchanged, allowing it to be integrated into existing VL MICA launchers. The existing missile data link mechanisms are compatible with the increased kinematic performance of the missiles, enabling current VL MICA systems to be upgraded to VL MICA NG standard by simple software updates.

Meanwhile, the French shipbuilder announced that the launch of the second Bani Yas-class corvette for the UAE Navy, Al Emarat, took place on 13 May 2022 at its shipyard in Lorient.

Naval Group, as a turn-key solution provider, will also train the UAE Navy’s crew from the equipment level up to the operational level. Starting in France, this preparation will continue with team-building and practice on operational scenarios in every warfare area in the Gulf.

Stéphane Frémont, Director of Surface Ship Programs at Naval Group, said: “The launching of Gowind® Al Emarat is a major industrial and symbolic milestone, where the corvette reaches her natural environment. The two Bani Yas class vessels benefit from the modular design of the Gowind® family and are the perfect asset to help the UAE Navy meet the challenges of today and tomorrow thanks to the most advanced technologies.”

Based on a scale model unveiled during NAVDEX 2021, the Bani Yas-class will be quite heavily armed, including with some multiple rocket launchers, likely for coastal fire support (the MK56 VLS for ESSM is not up-to-date):

Lorenzo Tual 27 Sep 2021
Several Greek media reported over the weekend that Greece would be on the verge of selecting a French offer for the Hellenic Navy new frigate requirement. The offer would consist of FDI (Belharra) frigates and Gowind corvettes.