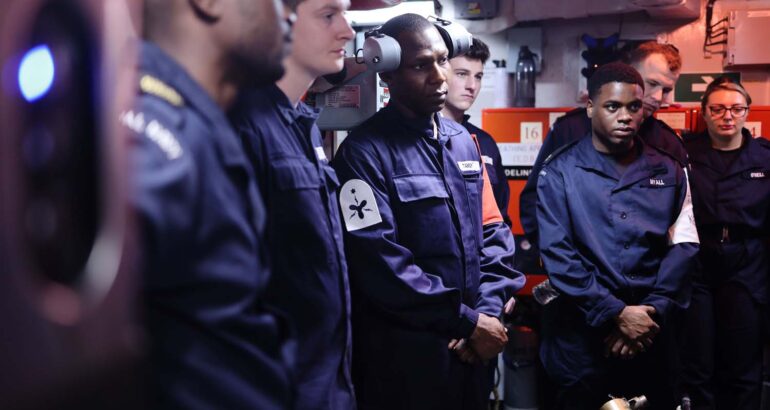 Royal Navy sailors are receiving a new uniform at the start of a £78m revamp of their clothing.

Royal Navy sailors to get cooler and fire-resistant new uniforms

Royal Navy sailors are getting new uniforms that are more practical, cooler and fire-resistant as a prelude to a £78 million revamp of their clothing.

More than a thousand personnel on operations in hot climates now wear the new working uniform – designed to be cooler and more practical in the sweltering conditions they face.

The rest of the RN will be issued the uniform – known as Rig22 – by the end of 2023, but improvements will continually be made based on feedback from sailors as part of a ten-year £78m project.

The aim is to supply clothing that can withstand the rigours of life at sea and, at the same time, be more practical and better fitting than the uniform it replaces.

“We understand just how important having the right kit is. We really appreciate the complexities and emotional attachments people have to the uniform and that’s why the uniform improvement project is something I feel very passionately about. The team want to deliver the best uniform that we can and the project is the way we hope to achieve this. Uniform is not simple and getting it right is challenging and complex. But we are committed, and we will work hard to ensure that the money is spent where it really matters.” said .

A further £40m will go on replacing other elements, such as boots and belts, while a new Gore-Tex foul weather jacket and thermal layer will arrive this autumn.

The new clothing is made from flame-resistant Nomex – also used in the suits of F1 drivers, which allows the body to breathe.

Feedback from more than 7,000 personnel has been incorporated into the final design, with three different fabrics tested extensively by 130 sailors on warships in the Gulf at the height of summer, where temperatures can reach 55ºC.

Sailors from HMS Montrose were among the first to test the new uniform and feedback to the team developing it. The Type 23 frigate is deployed in the Gulf long-term, keeping sea lanes open and tackling drug smugglers.

It means the new clothing has been tested in some of the most rigorous conditions the Royal Navy faces.

The project team has already responded to feedback and made some amendments to the uniform, including:

• Extra sizes of trousers and shirts.

• A loop on the shirt for hanging.

• Increased pleat size in the shirt for better movement under the arms.