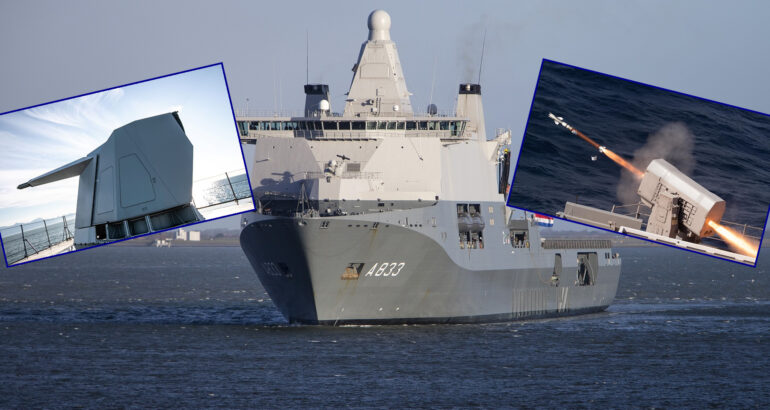 According to a letter from the Dutch Minister of Defence to Parliament, the Royal Netherlands Navy's joint support ship (LPD), HNLMS Karel Doorman (A-833), will be upgraded with a 76mm gun and a RIM-116 Rolling Airframe Missile (RAM) in order to improve its self protection.

HNLMS Karel Doorman is being subjected to a smart maintenance plan. In doing so, the Ministry of Defence deviates from the regular course of affairs, but the Joint Support Ship is still maximally deployable. State Secretary Christophe van der Maat informed the Lower House of Parliament of this by letter today.

The Karel Doorman has been in service since 2014. A midlife upgrade was originally planned for 2027 – 2028. This “rejuvenation” will now be split and carried out during two planned maintenance periods in 2025 and 2032. This will reduce the amount of time the ship needs to be in dry dock.

The Joint Support Ship serves as both a supply and transport vessel. As part of the fleet, the ship supplies Dutch and/or foreign warships with fuel, ammunition, food, and drinking water. In addition, the Karel Doorman can transport large equipment. The ship can carry dozens of vehicles and a considerable amount of cargo. This is especially important during military operations involving the entire armed forces when they are away from home. If requested, the Karel Doorman can help provide humanitarian disaster relief, such as after Hurricane Irma in the Caribbean in 2017.

The ship can also be used for so-called sea basing. In this situation, the warship supports land operations from the sea, such as by deploying helicopters or landing craft. If there is no port, the equipment is transported ashore.

A Midlife Upgrade is often performed halfway through a ship’s estimated life and is meant to maintain it deployable, with no malfunctions or system breakdown. Furthermore, the ship must continue to adhere to national and international laws and regulations governing seaworthiness, safety, health and safety, and environmental protection.

According to our information, the 76mm naval gun system in question will be the new Leonardo 76/62 Sovraponte (also known as Single Deck). The system system combines the 76/62 mm SUPER RAPID gun fire capabilities with the DART guided ammunitions, with a new low-impact and lightweight installation. Already selected for the PPA of the Italian Navy (its launch platform, placed above the helicopter hangar), the 76/62 Sovraponte is also likely to be fitted as main gun aboard the future ASWF of the Royal Netherlands Navy. Therefore its selection for the HNLMS Karel Doorman upgrade makes sense.

The “special radar that will allow the gun to fire radar-guided ammunition against air targets” mentioned in the Dutch MoD press release is the new PHAROS fire control radar by Thales Netherlands. Compared to the existing STRALES system by Leonardo, which is limited to tracking a single air target, PHAROS can track several at the same time, thanks to beam steering technology.

Contacted by Naval News for comments, a Leonardo spokesperson said the company can’t provide any information about the matter.

Naval News Staff 14 Jun 2022
Naval Group today laid the keel of the first mine countermeasure mothership for the Royal Netherlands Navy. HNLMS Vlissingenntended is the second of twelve mine countermeasure platforms of the Belgian-Dutch rMCM program.