As part of the Recovery and Resilience Plan (PRR), it was published in the Diário da República and in the Official Journal of the European Union, the Portuguese Navy launched this month, the limited tender by prior qualification, for the design and construction of a multifunctional naval platform.

This multipurpose naval platform will contribute, among other tasks, to the protection of marine resources and the Portuguese sea, through the prevention and surveillance of ocean pollution and maritime accidents, deterrence of illegal and irregular activities, monitoring of climate change and atmospheric events, as well as in humanitarian support.

This ship, conceived under a new concept of operation, will represent a major investment in innovation through the use of new technology, high-performance digital systems, Big Data, Digital Twin, and Artificial Intelligence, using airborne, surface, and subsurface robotic/unmanned systems, as well as for studies and tests for new means and new concepts, developed by academia and industry.

A technologically advanced Navy contributes to the country’s economic development and acceleration of change. 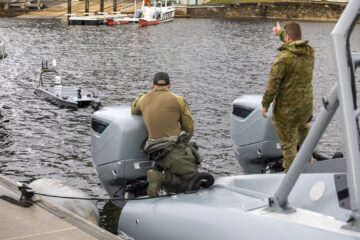 Naval News Staff 16 May 2022
Commencing today, HMAS Creswell and the waters of Jervis Bay will be the scene of a simulated, next generation naval battlespace – Exercise Autonomous Warrior 2022 (AW22).