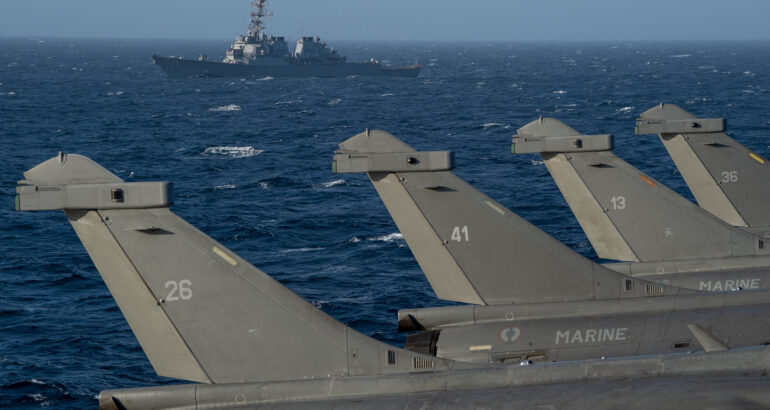 The two leaders shared observations about the conflict in Ukraine and discussed plans to advance high-end interoperability between the U.S. and French navies.

The two leaders reaffirmed their commitment to advance high-end interoperability between the U.S. and French navies. Russia’s unprovoked invasion of Ukraine underscores the importance of enhanced cooperation between like-minded allies intent on preserving a rules-based global order.

Lucas cited the contributions of USS Ross (DDG 71), which deployed alongside the Charles de Gaulle Strike Group (TF 473), as part of a cooperative deployment from February to April 2022. Sophisticated, combined task groups such as these demonstrate the existing high-level of interoperability between U.S and French surface combatants.

Merz commended the leadership of the Charles de Gaulle strike group during tri-carrier operations with the Harry S. Truman Carrier Strike Group and the Italian Carrier Cavour in the Mediterranean Sea demonstrating solidarity amongst NATO allies.

France is America’s oldest ally – dating back to 1781 when France supported the U.S. during the Revolutionary War. In the years since, the strong bond between the two allies has matured, testing joint, combined combat skills during both World Wars and continuing a long-standing tradition of exceptional military partnership in the years since.

The leaders will convene again next year for a Strategic Dialogue in Washington, D.C. For more information on the Strategic Interoperability Framework