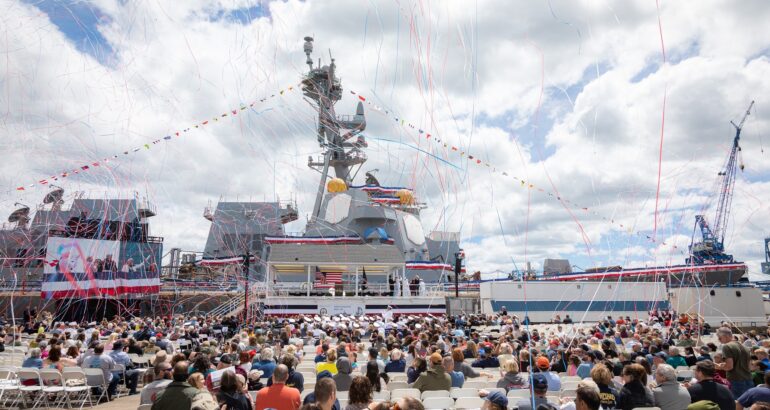 The ship’s namesake, Gunnery Sgt. John Basilone, received the Medal of Honor for heroism displayed in the Battle of Guadalcanal during World War II, where he led his heavy machine gun sections in defense of a critical position and inflicted heavy casualties on the enemy. Basilone later returned to action at the Battle of Iwo Jima in February of 1944, where he single-handedly destroyed an enemy blockhouse and led a Marine tank under fire safely through a minefield. He was killed in action later that day and was posthumously awarded the Navy Cross for his unwavering devotion and valiant spirit of self-sacrifice.

“The future USS John Basilone will serve as a constant reminder of the immense impact that actions taken by any one Sailor or Marine can truly have,” said Secretary of the Navy Carlos Del Toro. “Gunnery Sgt. Basilone is a national hero and this ship and crew will honor his legacy for decades to come.”

Arleigh Burke-class destroyers are the backbone of the U.S. Navy’s surface fleet, providing protection to America around the globe. These highly capable, multi-mission ships conduct various operations, from peacetime presence to national security, providing a wide range of warfighting capabilities in multi-threat air, surface, and subsurface domains. These elements of seapower enable the Navy to defend American prosperity and prevent future conflict abroad.