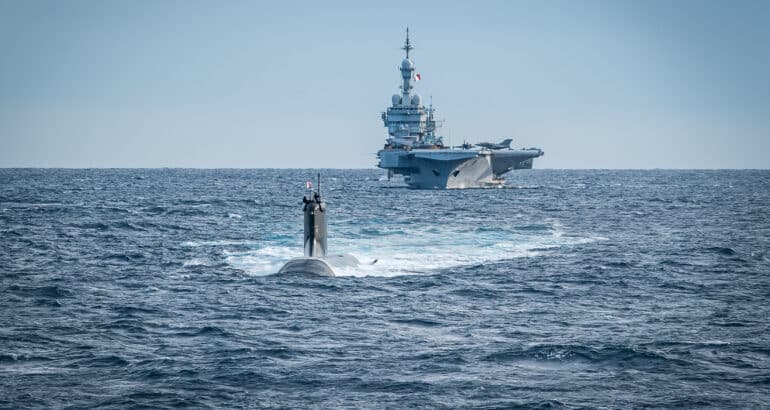 The French Navy (Marine Nationale) is working towards a Pacific Region deployment for its Charles de Gaulle carrier strike group in 2025.

One of the focus of the mission would be the level of interaction and synchronization with American assets. Naval News learned the information from a French Navy Command source. The source explained:

“The objective is that in 2025 we conduct dual carrier operations with the Americans. This would involve the cooperation between 4th generation [Rafale M] aircraft and 5th generation [F-35C] aircraft.”

The French-US interaction would be in the context of the recently signed “Strategic Interoperability Framework” (SIF). The inking of this SIF started a disclosure process where the U.S. administration and Navy can now share high level information with the French Navy on a number of issues including communication (as well as encrypted communication), seabed warfare, interoperability between F-35 and 4th generation aircraft as well as US strategy in the Pacific region. Our source added: “10 months after AUKUS, the relationship on the military level is maintained at a very high level, the Americans are willing to share as much as possible with us […] We think that the Americans have understood the differentiated nature of the French position on the political level, which is not a position of pure alignment with the American position. There are different interests, but on the strategic level, there is a common concern about preventing escalation, preventing miscalculations and containing the growing military ambitions in the whole Indo-Pacific region”.

Prior to 2025, the US Navy has already invited the French Navy to take a look at the tactics currently being evaluated between F-18s (which are 4th generation aircraft) and F-35s. This is currently being done aboard aircraft carrier USS Carl Vinson (CVN-70). The French Navy was also invited to an upcoming Red Flag exercise which will focusing on 4th gen / 5th gen aircraft teaming and tactics.

How far East in the Pacific Ocean the French Carrier Strike Group (CSG) will sail in 2025 ? It is much too early to know. Naval News understands that, ultimately, it will be a political decision, because this deployment will be a “high-level strategic posturing”.

That being said, it would not be a first for the Charles de Gaulle, our source recalled: The nuclear-powered aircraft carrier, flagship of the French Navy, already sailed at least twice “a few hundred miles East of Singapore”. This was in 2002 and, more recently in 2019 during the Shangri-la Dialogue, during which one of the escorts of the French CSG sailed all the way to the South China Sea.

Naval News understands that the French CSG could potentially take part in a POLARIS-like high intensity exercise, in the Pacific region, with key regional partners such as the U.S. Navy, Royal Australian Navy and JMSDF. The French Navy Command ambitions to turn POLARIS into a brand of “high level training” and to invite allied navies to the exercise. “The objective is to increase the credibility of our posture, our ability to react in a difficult environment, to have proven logistics and to have crews that can react when faced with the unexpected”. The first edition of POLARIS took place in late 2021.  This joint, combined and inter-theatre exercise involved 6,000 French troops from the three services (French Army, Navy and Air Force), including 4,000 French Navy sailors, and was the largest exercise of this type ever conducted in France.

If it does take place in 2025, this French Navy deployment would follow the deployment of the Jeanne d’Arc mission to the Pacific region next year. “Jeanne d’Arc” is held every year and is a long duration and joint deployment which aim is to provide officer cadets with “at sea” operational training before joining their units as officers. It usually consists in an Amphibious Ready Group composed of a Mistral-class LHD and a La Fayette-class frigate. Jeanne d’Arc 2023 is set to take part in “Croix du Sud”: A large joint and combined exercise in New Caledonia. As we reported previously, the French Navy is also mulling to send an Air Defense FREMM frigate to take part in RIMPAC 2024. A Rubis-class nuclear powered submarine deployed to the region last year and conducted logistics stops in Australia and Guam. In 2021 as well, a combined and joint amphibious exercise (ARC 21) was held between Australia, France, Japan and the United States around a Japanese island. Later that year, French SIGINT ship Dupuy de Lôme made a rare Taiwan Strait transit. Of course, the French Navy maintains a permanent presence in the region, with two naval bases in its territories: Tahiti and New Caledonia.