Home» News»Navantia Integrates Unmanned Vehicles on Spanish Navy Vessel
The USV “Vendaval”, owned by the Port Authority of Ceuta and developed by Navantia (top) was integrated with BAM “Audaz” of the Spanish Navy. Navantia picture.

Navantia has successfully carried out the integration of unmanned vehicles aboard a Meteoro-class offshore patrol vessel. This is the first time Navantia integrates unmanned systems aboard a Spanish Navy vessel.

Navantia Sistemas, the systems division at the Spanish company, has successfully carried out the integration of unmanned vehicles in the Combat System (SCOMBA) on board the BAM “Audaz”, during the tests carried out in Cartagena as preparation for the upcoming NATO Dynamic Messenger exercises. This is the first time that this integration has been achieved in a real environment, thanks to the NAIAD system (Naval Advanced Integrated Autonomous vehicles Defence system), also developed by Navantia.

Navantia’s SCOMBA consoles have been able to monitor the data and videos received from the vehicles, and the sending of missions to the USV “Vendaval”, owned by the Port Authority of Ceuta and developed by Navantia, has been successfully tested.

Likewise, communications have been successfully tested between the NAIAD on board the BAM “Audaz” and the NAIAD on land, installed for these tests at the Naval Station in Cartagena. The communication between the two systems allows the information from the unmanned vehicles available on board the “Audaz” to be transmitted to the shore control centre. The USV “Vendaval” can be used as a relay between the two NAIADs, thus allowing a longer communication range. Tests of the remote control of the “Vendaval” from both the on-board NAIAD and the shore-based NAIAD were also successfully carried out.

The Spanish Navy expressed its satisfaction with the results obtained, describing the event as a historic milestone, as it was the first time that unmanned vehicles had been integrated into one of its ships.

The Dynamic Messenger (DYMS22) exercises, organised by NATO, will take place next September in Portugal, with the aim of testing operational concepts and doctrines for the use of unmanned vehicles in naval tactical operations. Following the good results achieved in the 2021 REPMUS exercises with Spanish participation, the Spanish Navy will participate with the BAM “Audaz”, whose Combat System will integrate, through NAIAD, three unmanned surface vehicles (Vendaval, Kaluga, and Sead 23) and an unmanned aerial vehicle (Airfox). 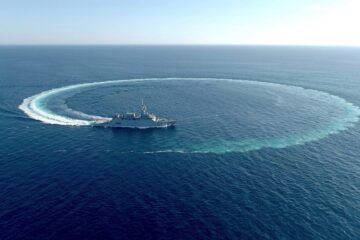