Naval News: Can you discuss the future and progress of UCAVs such as the MQ-25 and X-58A “Valkyrie?”  What is taking so long, and how many UCAVs do the US Navy intend to field?  Would these UCAVs require new light carriers to be built to transport them?

RADM Loiselle replied that there are three sets of UCAVs to consider:

The second set is something that can go into that high threat environment, perform a given mission, briefly, i.e.: a strike mission, and then leave and have a very high chance of coming home.

And the last set is something that is at an attribute price point, a smaller vehicle, that might perform any number of different missions, anything from going out there with our fighter aircraft and carrying more air-to-air missiles for those types of missions, or someday we might want to integrate that thing into our electronic warfare distributed architecture to conduct that mission.

And then we might also use those types of drones for distributed Command and Control network.  So, as we go into the Airwing of the future, we will be operating at ranges off the aircraft carrier that vastly exceed what we’re doing today. And so, in order to do that, [the] unmanned portfolio really needs to be part of that system because it is the easiest way for us to keep a normally-sized aircraft, but then have all that extra space for fuel to get us the range that we require to get out there and play with some of the aircraft that are under development right now at vastly higher ranges.”

“Under development right now we have the MQ-25 which is first envisioned as a tanker, so that’s its primary role in its initial installation, so we expect that to be out making its initial deployment in the [20]26 time frame.  So, they are real [UAVs and UCAVs] and there are several things under development right now that I am very excited about.”

RADM Loiselle said that the UAVs are not part of the NGAD (Next-Generation Air Dominance fighter program) development or exclusively used for the NGAD program.

Naval News readers can catch up on UCAV developments and combat experience here.  As the U.S. Navy stated at Sea Air Space 2021, UCAVs are still a few years away from being fielded on U.S. Navy aircraft carrier flight decks.

For speculative discussion purposes, the three sets of UCAVs (or Unmanned Combat Aerial Systems (UCAS)) as mentioned by RADM Loiselle are only fractionally known and made public as some programs may be considered Secret and “Black Programs” being developed by the famed Lockheed Martin Skunk Works and Boeing Phantom Works.  Northrop Grumman is also a leading contender of secretive aircraft and drones as are other smaller manufacturers.

The following analysis and unmanned systems examples are obviously not at all encompassing as there are just too many built UAVs and UCAV prototypes to showcase and mention.  However, some examples tested by the U.S. Navy do stand out to fit into RADM Loiselle’s “three sets” working in hostile environments.

Depending on the threats against it, the General Atomics MQ-9 “Reaper” can loiter, persist, and deliver ordnance in a high threat (“First Set of UCAVs”) environment.  For example, the U.S. Marines have just purchased 8 of the Extended Range (ER) MQ-9As for their arsenal in July 2022.  The USMC MQ-9A ER has an endurance of 30 hours and with external fuel tanks, its range can extend to 42 hours while carrying 1,000 pounds (450 kilograms) of munitions.  However, not all UCAV concepts become reality because according to Breaking Defense, the U.S. Air Force has decided not to go ahead and manufacturer the B-21 Stealth Bomber UCAV variant.

In the on-going conflict in Ukraine, Ukrainian forces have put the Turkish-made Baykar TB-2 Bayraktar to good use in what can be considered a “high threat environment”. This UCAV, which is also in use with the Turkish Navy, have successfully destroyed several Russian Navy assault boats and landing craft.

The stealthy Kratos XQ-58A, Boeing X-45 and the Northrop Grumman X-47 UCAVs are meant to “dash strike” in high and medium threat environments and perform the “Second Set of UCAVs” according to RADM Loiselle of striking a target, “turning tail,” and making its way back home usually in one piece.  The reason for belonging in the “Second Set of UCAVs” is because the internal weapon bays of these stealthy-shaped UCAVs only have space for a couple of bombs and often no self-defense air-to-air or Anti-radiation (against enemy radar) missiles.  The X-45 and X-47 existed as a couple of prototypes, completed flight tests for the U.S. Navy, and never entered service.

The Kratos XQ-58A UCAV prototype has not entered production and fielding, but its greater than 2,550-mile (4,103 kilometer/2,215 nautical mile) range should be an attractive feature to cross the vast “tyranny of distance” to perform “dash-strike” missions in the Pacific region.  The XQ-58A UCAV can be disassembled and stuffed inside a 40-foot cargo shipping container for transport to the site and then assembled and launched.  Such a transportability feature would greatly benefit any UCAV “drone war of attrition” as cargo containers with XQ-58As can be transported via ship and then hoisted aboard the launching vessel, or the containers opened, the X-58A assembled and armed, and launched from the transporting vessel.

Finally, the “Last Set of UCAVs” according to RADM Loiselle could be a “smaller vehicle” such as the Martin UAV V-BAT that can help establish a distributed Command and Control network, or contribute to electronic warfare, or conduct Intelligence, Surveillance, and Reconnaissance (ISR) missions.  Loitering Munitions such as the ones the U.S. Marine Corps are experimenting with (Switchblade and HERO Loitering Munition series) can also factor in as a sort of smaller ISR/UCAV weapon. 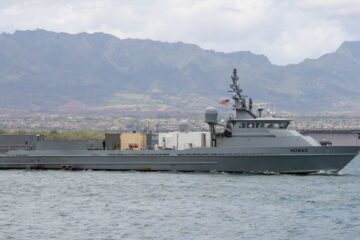