The workstation is the aircrew’s primary interface to mission-critical systems, allowing them to successfully navigate demanding anti-submarine, anti-surface, and intelligence, surveillance, and reconnaissance missions. There are two systems per aircraft, which control the aircraft’s sonar, radar, sensors, and weapon systems.

“Our mission computing and display system provides the reliability required for P-8 aircrews to operate in challenging environments. This newly qualified workstation will enable superior mission computing performance while providing size, weight, power, and ergonomic benefits for the aircraft and its crew.”

Built with ultra-strong lightweight composite materials, the workstations improve aircraft and weapon systems’ performance. They are also designed with ergonomic considerations, such as an optimal viewing angle for both seated and standing crewmembers. 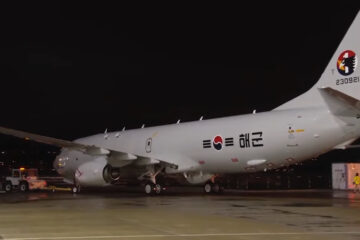 Naval News Staff 20 Sep 2021
A significant capability milestone has been achieved for the Royal Australian Air Force's (RAAF) P-8A Poseidon platform. Operated by units under the command of No. 92 Wing, the P-8A Poseidon fleet underwent extensive modifications over a period of 12 months to support future upgrades to the capability.