Finland and Estonia have reached an agreement that will see their respective navies integrate their coastal defences so that they can be better coordinated and close the Gulf of Finland to enemy vessels.

One area in which the Finnish NATO membership will have a drastic effect is on the strategic situation in the Northern Baltic Sea, including the Gulf of Finland. The small gulf is home to some of the busier sea lanes of the world, including passenger ferries, oil & gas exports, and other merchant shipping. From a Russian point of view, it is also the gateway to the oceans for vessels operating to and from the St Petersburg region, as well as the transit route for any naval vessels passing between the two major bases of Russia’s Baltic Fleet – Baltiysk in the Kaliningrad exclave and Kronstadt outside St Petersburg.

As such, the announcement by the Estonian minister of defence Hanno Pevkur to Finnish tabloid Iltalehti earlier this month that Finland and Estonia had reached an agreement on integration of their coastal defences is a heavy blow to any Russian ambitions in the Baltic Sea in case of war between Russia and the alliance. The move will mean that Finland and Estonia are able to shut down the sea lanes to and from St Petersburg for Russian surface vessels, creating what Pevkur termed a NATO-owned inland sea out of the Baltic.

At the heart of the concept is the land-based missile batteries operated by both countries as well as the surface vessels of the Finnish Navy. These are to be Blue Spear missiles for Estonia, developed by Proteus Advanced System (a joint venture made up of Israel Aerospace Industries and Singapore’s ST Engineering Land Systems). The system was recently showcased at Eurosatory 2022.

Finland is currently using Saab’s RBS 15SF which will be replaced by the IAI Gabriel V missile in the near future. The weapons are likely related, and sport high subsonic speed, modern datalinks, secondary land-attack capability, and 200-300 km range. In addition, both countries operate modern Finnish-built influence mines, and Finland has a number of shorter-ranged coastal defence systems such as fixed 130 mm guns and SPIKE-ER missiles. These are then controlled through a command system fed by several sources, including dedicated sensors such as the man-portable Thales BOR-A 660 radar in use by Finnish coastal recce squads or the trailer-packed AN/TSQ-288 system donated by the US to Estonia last year.

Ironically, the first country to try and close the Gulf of Finland from ashore was Czarist Russia when Nikolai II ordered the construction of coastal artillery on both shores of the Gulf of Finland to be able to protect the Russian capital following the disaster at Tsushima. After the downfall of the czar and the independence of Estonia and Finland in the aftermath of World War One, the vast majority of these fell into the hands of the newly independent countries who held secret talks during the interwar years about the possibility of an integrated coastal defence. The talks eventually stranded, and the Soviet occupation of the Baltic states post-World War Two meant that it would be almost a century before the plans now will come to fruition.

Posted by : Robin Häggblom
Robin Häggblom has a M.Sc. in technology from the University of Oulu and has been working in different positions within the Finnish maritime and defence industry for the last decade. He is also a defence analyst under the nickname Corporal Frisk. 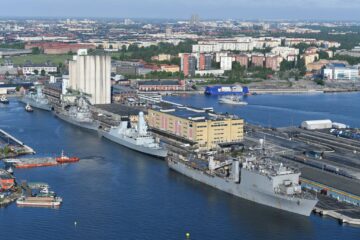 BALTOPS 22 Multinational Exercise kicks off in the Baltic Sea