The U.S. Navy awarded General Atomics an order for the development of EMALS and AAG systems for France's future aircraft carrier (known as PA-Ng).

General Atomics, San Diego, California, is awarded an $8,837,078 firm-fixed-price order (N0001922F2258) against a previously issued basic ordering agreement (N0001921G0014). This order provides for the development of a two or three launch motor subsystem, two energy storage group tailored configuration of the Electromagnetic Aircraft Launch System (EMALS) and a three wire, six energy absorber subsystem Advanced Arresting Gear System configuration that are compatible with the government of France’s future aircraft carrier and provides acceptable mission capability. Work will be performed in San Diego, California (98.85%); and Tupelo, Mississippi (1.15%), and is expected to be completed in June 2023. Foreign Military Sales customer funds in the amount of $8,837,078 will be obligated at the time of award, none of which will expire at the end of the current fiscal year. The Naval Air Systems Command, Patuxent River, Maryland, is the contracting activity.

For the record, the United States’ State Department approved back in December 2021 a possible Foreign Military Sale (FMS) to France of Electromagnetic Aircraft Launch System (EMALS), Advanced Arresting Gear (AAG), and related equipment for an estimated cost of $1.321 billion.

The fact that the PA-Ng would be fitted with US-made EMALS was confirmed to us recently by the head of the French Navy (Marine Nationale), Admiral Vandier, in an exclusive interview.

General Atomics announced last month a new milestone for the launch and recovery systems: 10,000 catapult launches and arrested landings using the EMALS and AAG have been successfully and safely completed aboard USS Gerald R. Ford (CVN 78).

French President Emmanuel Macron officially green lighted the construction of a new nuclear-powered aircraft carrier as part of the PA-Ng program one year ago (8 December 2020). The future flagship of the Marine Nationale is intended to replace the existing Charles de Gaulle around 2038.

The PA-Ng will be much larger compared to the in-service Charles de Gaulle: It will have a length of 300 meters, a width of 80 meters with a displacement of 75,000 tons.

First steel cut is set for 2025, while sea trials are set to begin in 2036 and commissioning with the French Navy in 2038, which matches with the expected decommissioning of the Charles de Gaulle.

The initial artist impressions released by Naval Group confirm some of the technical:

*While some of the previously released PANG artist impressions showed a three EMALS configuration, more recent images show only two of them. Officially, the PA-Ng preliminary studies take into account two catapults (as mentioned in the DSCA notice issued today: ” one (1) Electromagnetic Aircraft Launch System (EMALS), 2 launcher configuration “) but provisions remain to add a third one. 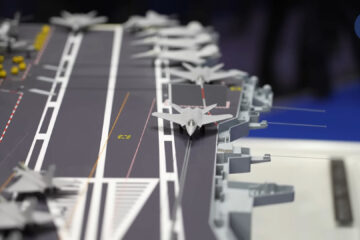