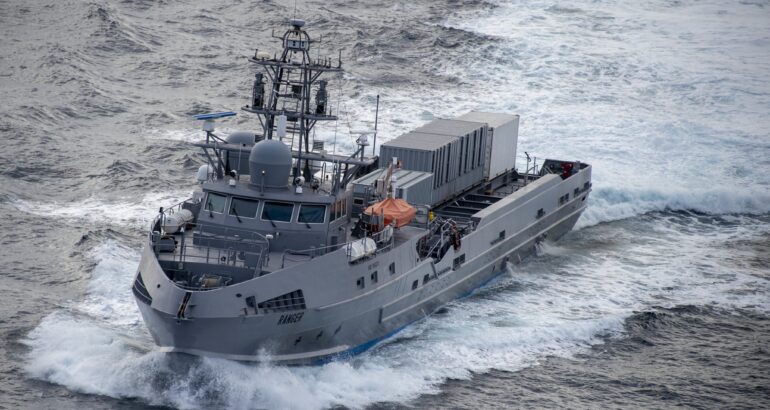 US Navy Talks About USV, Data and MUM-T

“How do we use machines in a smart way to increase the efficiency of the data that they’re getting so that the data they do have to make decisions on can be processed in a quick manner to get after the problem sets?”

Naval News: Many foreign navies have USVs that appear to work or have better designs and lethality than the US Navy’s.  What makes the US Navy’s USVs better or more competitive than other nations?

Dr. Rob Liu: “Okay, so this is opinion, conjecture, however you want to say it. We have the most experience on the open water as a Navy as captured in our training; as storytelling that happens in our training and passed on from experienced sailors to less experienced sailors, and also captured in our data; data that is exploited that we can support. That is the differentiator; we have experience in the high seas. There are really cool systems out there—autonomous systems that our adversaries are putting forth. They’re still trying to figure out how to fix a ship; how to actually operate on the seas; they’re not at the point of integrating the unmanned platforms. We got to get there fast. I think that is our main advantage—again opinion, conjecture, however you want to call it.”

LT Marissa Samons: “I think I would also add that you shouldn’t believe everything you read in the news. Just because there are unmanned, `alone and unafraid’ vessels out there in accordance with some news article that this country or that country is this far along; I’d take that all with a grain of salt. I think that we are holding some of our cards close to our chest, and that we are working that next-level integration of how do these work in a manned/unmanned teammate environment in the open ocean for a higher-level fight. At SURFDEVONE, we are working medium and large unmanned surface vessels. There is a whole other world out there of smaller USVs that are Program of Record that the Navy is using now with great capability.”

CDR Jeremiah Daley, USN: “Our dynamic nature of how we tackle problems is how we will win the next fight.  And it starts today in how we work through tackling data problems, figuring out exactly what type of machine-to-machine communication we need to give the smaller amount of data to the decision maker in the manned/unmanned team.”

Naval News: Do sea salt, corrosion, INDO-PACOM weather and Sea States affect USVs and their electronics enough to turn them into high maintenance issues after each mission?

Lt. Strain: “In environments when you deal with sea spray, weather, sea state, all kinds of different things that affect your sensors, the best way to make a decision about how to change that sensor is to ask a person. We have to get the data from those sensors into a format so that person can read and then decide how to change so to make it useful again. Automating and managing a radar picture is an incredibly difficult problem; we are years away from doing that, even in industry. The best way to do it now is with people. We have to do it with data infrastructure and with their [the sailors’] ability to change that software and how they’re reading that data and how their machine counterparts are reading that data. They’re the only ones who can put it into operational context and that is what you have to do.”

Dr. Rob Liu: “So I think the question was about salt water, corrosion…you know what doesn’t corrode? Data. Doesn’t corrode.”

Lt. Samons: “If you’re at a very low technology level, you need a lot of human intervention. Every decision that the USV is making, a human has to be aware of, and concur with or not concur with.  …Is that system trustworthy? Is it a high enough technology level for me to allow it to do X, Y, Z without my intervention? And we’re still in that middle phase of whatever the machine does, the human needs to buy off on. But once that technology reaches a certain level, and human trust reaches a certain level because of the technology reaching that certain level, we can kind of buy back some of that human brainpower away from that and into the more tactical situation. And that is where we also talk about that evolutionary versus revolutionary. We’re not going to send out RoboCop into the ocean tomorrow, but we’re going to build trust in a way that make sense in a manned/unmanned teammate world where the human is never out of the loop but maybe doesn’t have to use as much brainpower over time.”

“What `data burden’ is the government going to have to take on with these technologies?”

The USV panel mainly focused and discussed data gathered and transmitted from USVs and how best to analyze, process, decide, and organize that data.

CDR Jeremiah Daley, USN, Commanding Officer, USV Division One, said that as the US Navy progresses with manned/unmanned teaming, the Navy will get more complex.

Regarding USV contributions to RIMPAC 2022, CDR Daley said, “One of our USVs directly contributed to the targeting picture for a live-fire exercise. But they didn’t talk directly to the manned ship first.” He also mentioned that one USV was for EW [Electronic Warfare] and the other USV was for ASW [Anti-Submarine Warfare] and that the USVs were Sea Hunter and Sea Hawk that teamed with US destroyers for RIMPAC 2022.

Lt. Brandon Strain, lead action officer of “Task Force Hopper,” replied to a question about the barriers to Artificial Intelligence (AI) by stating that, “The biggest challenge we have right now is that we have to shift from the mindset we have right now to one of data and software-focused.  And we done [sic] that before. We done [sic] that over 100-years ago. We did that with the first information management system that was ever-present on-board ships, and that system is fire control. …Right now, we don’t have clean data; we don’t have software literacy.”

“Clean data is really important,” said Lt. Strain regarding the second challenge of barriers to AI.  Lt. Strain says that on the ship’s Bridge, if you have a system that deals with radar data or imagery data, and you have another system that deals with the same data, those two data systems don’t often use the same language in describing that data. That makes the problem in orders of magnitude more difficult in trying to build AI models and analytics. The US Navy needs people in uniform who can write the programming code, look at that data, analyze that data, and make decisions with that data.  Without these two AI challenges addressed, we’re never going to succeed, noted Lt. Strain. The data is the challenge and getting into the development standpoint from the uniform-side.

Lt. Marissa Samons, ASW and Surface Warfare Officer, Sea Hunter and Sea Hawk supporter, said, “We tried out a lot of different constructs [regarding USV testing]. We done manned/unmanned teaming; we’ve done `alone and unafraid.’ We’ve been introducing these to the Fleet and getting their feedback on what they would like to do with them.”  Some results of USV testing for the Navy are: “What we want is (manned/unmanned teaming) multi-vessel collaboration that relies on Edge Processing as an extension of your own ship’s sensors.  So, think of that in an air, a surface, and a sub-surface…a series of unmanned teammates to help one ship do its job more effectively.”

Lt. Samons noted that all this that is done by one human operator in combat with the potential of two unmanned teammates. One of them will be the sensor for over-the-horizon intelligence, surveillance, and reconnaissance (ISR).

Dr. Rob Liu, Lead Data Scientist for “Task Force Hopper” and “Project Overmatch,” said, “We people do not receive data the same way that a system do [sic]. We don’t want the system to see the data like we see it, nor do we want the data the same way the system sees it.” The US Navy wants to break that system into what is the machine capable of doing and what is the human capable of doing, such as the fire control example given by Lt. Strain. Dr. Liu said that the data that will be captured in the year 2023 will be more data than was captured in all of human history, so he asked the audience to think about that accomplishment and complexity. Therefore, the volumes of data captured are becoming astronomical and the U.S. Navy needs technologies to achieve this, and one way to do this is to modularize the data for organizational and managerial purposes.