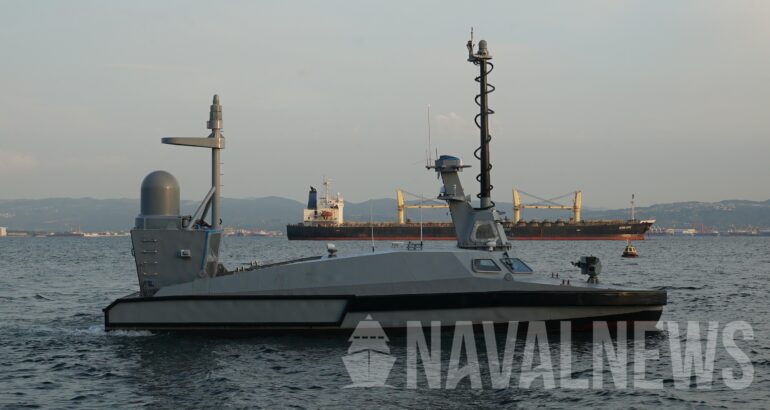 MARLIN USV during trials in the Sea of Marmara

Turkish SEFİNE Shipyard and ASELSAN unveiled the brand-new MARLIN USV in two NATO exercises in the second half of September 2022. This was the first Turkish participation in the Portuguese-led REPMUS (Robotic Experimentation and Prototyping Exercise Augmented By Maritime Unmanned Systems) exercise, and the two companies demonstrated the capabilities of their ambitious design.

According to SEFİNE and ASELSAN, the Marlin is one of the most capable USV to date, thanks to its size, payload, configuration adaptability, and especially its electronic warfare (EW) capabilities, which can be considered a “first” in the field. The payload of MARLIN during the NATO exercises were specifically for EW. The 15-meter ship will provide fleets with off-board jammers, which would be beneficial for surface warfare.

Naval News: Can you tell us about your new USV? What makes it different compared to existing ones?

M. Civelek: First of all, MARLIN heralds a new era of naval warfare. Apart from all the examples we have seen in the world so far, it has a flexible architecture and the payload configuration can be easily changed by the user. Actually, MARLIN is the name of the intersection cluster of a family of USVs. In other words, it is the common infrastructure of MARLIN unmanned surface vehicles that can be configured for different naval warfare types.

In addition to this common infrastructure, we can list the special characteristics of MARLIN as follows.

– Having long endurance at sea,

– Being designed for open sea operations in addition to the coastal waters,

– The ability to provide different infrastructures to meet the requirements of heavy payloads,

– Compatible with single or swarm operations,

– The only unmanned surface vehicle in the world to have an electronic warfare package with ED and ET capabilities.

– Capable to carry and launch new generation surface-to-surface guided missile that is low cost, medium range, has high firepower and can engage targets on land and sea (no comparable platform is known).

Naval News: What are the payload options of the new USV?

Naval News: What were your USV’s role in the forthcoming exercises?

M. Civelek: During the exercise, MARLIN focused on the following topics.

– Collection, processing, distribution, and use of real environment data

Among the participants in the exercise, there is no other unmanned surface vehicle that can be used in all these areas. This situation particularly attracts the attention of NATO exercise planning authorities. In this regard, we expect MARLIN to receive the attention we believe it deserves during the exercise process. Our goal is to achieve important export successes in this regard.

“We believe that MARLIN will change the perspective of many decision makers who plan capabilities and create force structures and will truly be the marker for the transition into a new era of naval warfare.”

Naval News: What kind of system will you use to launch and recover MARLIN?

M. Civelek: It can be carried by the surface assets like amphibious and logistic support ships and launched & recovered with the cranes of these ships or can be deployed in the well deck of amphibious ships. In addition, the MARLIN USV, which can be transported by both land and water, can leave the shore and proceed to the mission area, rejoin the organic body of the task force at the end of the mission, or return to the shore.

Naval News: Do you have a launch customer yet? And what about future prospects?

M. Civelek: We expect significant progress in the export of MARLIN. At this point, providing additional information will be ineffective. Concerning future prospects, the first half of our roadmap consists of expanding MARLIN’s capabilities and continuing to use MARLIN as a common structure. Be ready to witness a variety of new skill sets and surprises in the second half of our plan.

MARLIN is an autonomous USV designed to meet the high speed, sea keeping and maneuverability requirements. The company didn’t share the dimensions and the endurance of the USV due to the confidentiality concerns, but available data suggests that the vessels optimal speed is 12 knots and it can exceed a top speed 36 knots. In addition, MARLIN is rather large, with a length of about 15 meters and a large payload capacity. MARLIN’s special hull form, propulsion system, and auxiliaries, allow it to operate up to Sea State 4 (and navigate in rough seas up to Sea State 5).

It can be configured as an anti-surface warfare (ASUW) with guided missiles, and anti-submarine warfare (ASW) with torpedoes.

According to SEFINE, MARLIN can easily be fitted with different types of payloads (SSM, Torpedo, EW, Sonobuoy, SATCOM, LOS Communication, Underwater communication…) in order to meet operational needs with both monohull and trimaran hull forms as well as optimized for endurance figures.