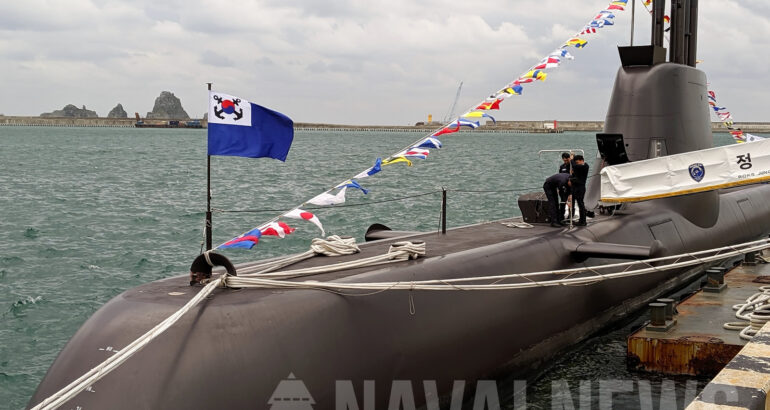 According to a report submitted by People Power Party National Assembly Member Shin Wonsik major defects have been found on all nine of the Republic of Korea Navy (ROKN)’s Son Won-il class submarines, modified versions of the German Type 214 also known as KSS II. This is a major blow to the ROKN’s submarine force, which heavily relies on the vessels.

According to Shin, defects in the inverter modules’ cables were found on 7 of the Son Won-il class submarines, while 2 of them had “functional” defects in the inverter modules themselves. The modules, produced by Germany’s Siemens, are a critical component in a submarine’s propulsion system, with twelve installed in each submarine. Naval News reported earlier this year that three of the Son Won-il class submarines suffered from problems with the system. The latest briefing by Shin has confirmed that the issue is significantly more extensive than previously thought.

To make matters worse, the exact cause of the cable-related defects remains unknown, meaning that seven of the ROKN’s submarines have been deployed without the necessary repairs. This has led to numerous incidents, including one involving the third ship of the class, ROKS An Jung-geun, which had to be towed back to shore after being stranded in the middle of the East Sea when the inverter modules failed abruptly in January last year.

“The biggest problem with this is that the ROKN has continued to operate the vessels without having figured out the cause of the problem, as if there were no issues with the propulsion system…Their claim that there are no issues contradicts the fact that they are trying to get the modules replaced. The ROKN top brass needs to figure out what is going on.”

Shin also went on to say that the problem is “most probably” a result of the depolymerization of the cables’ outer coating instead of structural defects in the cables themselves, given that they have three layers of protection. However, there could be additional problems. For example, ROKS Jeong Ji, the second ship of the class, has not been deployed since October 2019, due to a leak from its cooling system damaging the inverter module. Naval News interviewed the Captain of ROKS Jung Ji during MADEX 2019. Moreover, further damage could have been caused to the inverter modules by the rust that has been generated from the cables.

The Defense Acquisition Program Administration has paid Siemens 7.1 billion Korean won (around $ 5 million) for repairs. It is expected that the repair process for each modified Type 214 submarine, including the time it takes to transport the modules to Germany, will take six months. This is likely to negatively affect the submarine fleet’s readiness in the years to come. The current administration has blamed the previous administration for this failure.

“The submarine’s importance to our military strategy is growing by the day…the fact that the previous administration ignored this problem despite the very serious security situation that our nation is in is irresponsible and deplorable.”

However, some South Korean observers also wrote online that the current administration should also take responsibility and stop redirecting criticism.

The Son Won Il-class were acquired as part of the KSS-II program and is based on Type 214, a diesel-electric submarine developed by Howaldtswerke-Deutsche Werft. The vessels, which are named after the ROKN’s first chief of naval operations, Admiral Son Won-il, were a major milestone due to their use of the air-independent propulsion system.

Of the nine submarines in the ROKN’s inventory, the first three were built by Hyundai Heavy Industries (HHI) with the remainder being split between HHI and Daewoo Shipbuilding & Marine Engineering. The first vessel was commissioned in 2007. The last vessel of the class, the ROKS Shin Dol-seok, entered service in 2020.