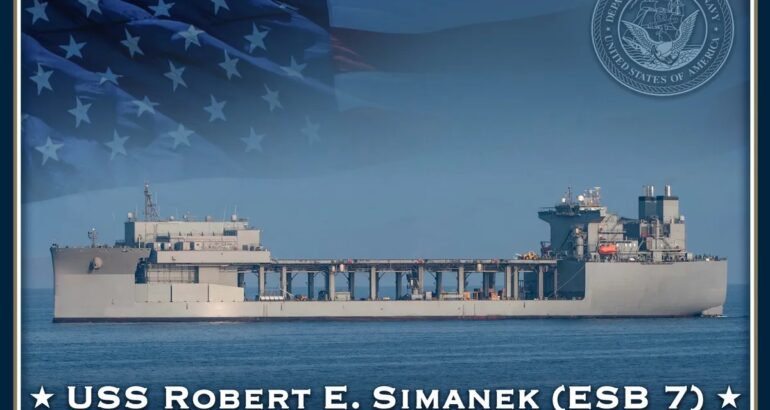 An illustration for ESB-7 ceremony (US Navy image)

The keel for the future USS Robert E. Simanek (ESB 7), a Lewis B. Puller-class Expeditionary Sea Base (ESB), was laid at the General Dynamics National Steel and Shipbuilding Company (NASSCO) shipyard in San Diego, October 21.

The ship is named for Private First Class Robert Ernest Simanek, who was awarded the Medal of Honor for shielding fellow Marines from a grenade at the Battle of Bunker Hill during the Korean War. The Medal of Honor was presented to him by President Dwight D. Eisenhower in a White House ceremony in 1953.

Simanek recently passed away on August 1, 2022. In addition to the Medal of Honor, he received a Purple Heart award, the Korean Service Medal with two bronze service stars, the United Nations Service Medal and the National Defense Service Medal. His daughter, Ann Simanek, is the sponsor of the ship and attended the keel laying ceremony.

“We are honored this ship will celebrate the late Robert E. Simanek’s legacy as a Medal of Honor recipient and Korean War veteran and his dedication to our country. ESBs provide a critical capability to the fleet and provide for increased flexibility.”

Expeditionary Sea Base ships are highly flexible platforms used across a broad range of military operations supporting multiple operational phases. Acting as a mobile sea base, they are a part of the critical access infrastructure that supports the deployment of forces and supplies to provide prepositioned equipment and sustainment with adaptable distribution capability.

In 2019, the Navy decided to commission all Expeditionary Sea Base ships to allow them to conduct a broader and more lethal mission set compared to original plans for them to operate with a USNS designation. A Navy O-6 commands ESBs and a hybrid-manned crew of military personnel and Military Sealift Command civilian mariners. This crew makeup provides combatant commanders with increased operational flexibility in employing the platform.