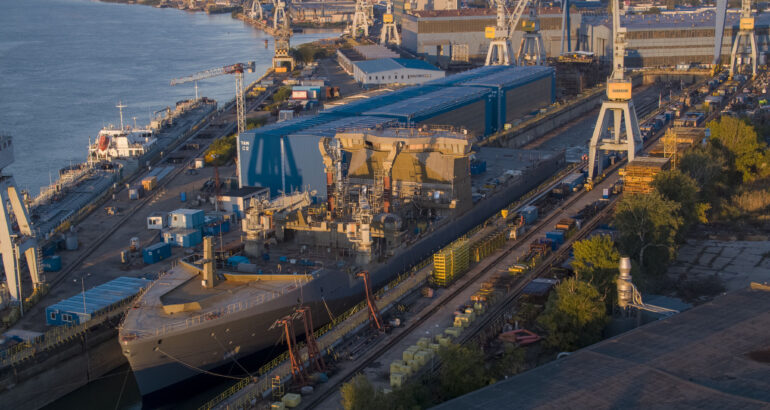 Last week, the construction of the Royal Netherlands Navy's future Combat Support Ship (CSS) "Den Helder" reached a new milestone at the Damen shipyard in Galati, Romania. The ship was floated and taken to a deeper part of the dock.

Damen Shipyards announced the development on its Linkedin page by providing the photos while the ship was moving to the deeper part of the long dock.

“The new Combat Support Ship is taking shape at the Romanian shipyard of Damen in Galati. Over the past six months, we have worked hard to link the hull parts together. The big project is going according to plan. Last weekend the ship was taken to a deeper part of the dock, the so-called floating. An important moment in the construction of the new supply ship of the Royal Netherlands Navy.”

Damen also stated that work can continue in the deeper dock. For example, more height from the helicopter deck will be installed in the coming period. As a result, the ship is deeper in the water.

“As soon as the steel construction and painting are finished, relocation to a quay follows. Once moored there, it is time for installation work, commissioning and testing. By that time, the future crew is preparing to take the ship on a trial run. That trip is expected to be in early 2024.”

The dry dock consists of two parts: the shallow part and the deep part. The shallow part is about 230 meters long and therefore large enough for the almost 180 meters long ship. The ship was taken from the red area to the orange area mentioned in the image below.

The future Den Helder CSS will reportedly be armed with a 76 mm naval gun and a close-in self-defense weapon system (CIWS). According to our colleagues at Marine Schepen, Den Helder will benefit from additional defense budget. Citing the Defense Projects Overview, the portal reports that the ship will be armed with CIWS and radar to defend against anti-ship missile. The vessel was initially set to be “fitted for but not with”.

Damen Shipyards Galati laid the keel of Den Helder CSS with a ceremony in Romania on June 02, 2021.

The nearly 200-meter-long ship will have a 75-sailors crew with accommodations for an additional 75 people on board. The design can accommodate several helicopters and around 20 ISO containers.

During NEDS 2019, Damen was showcasing a scale model of the CSS, mentionning the following dimensions: