Home» News»Hull Vane B.V. presents its innovative products to the Hellenic Navy
FDI tank test model fitted with a hull vane. This model was showcased during the Naval Group innovation days in 2021.

NN: Could you tell us a bit about your technology?

BB: We produce an energy-saving and seakeeping device for medium-speed ships, called Hull Vane®. The Hull Vane recovers energy from the stern wave, making ships more efficient, more silent and faster, while being less visible. It also reduces ship motions in waves. Fuel consumption and CO2 emissions are typically reduced by 10 to 20% on naval ships. It is a proven solution, both in terms of performance and longevity, and can be compared with the bulbous bow in many respects. It is passive, needs to be designed and built well and is basically fit-and-forget. The main difference with the bulbous bow is that Hull Vane® is a patented solution, so it can be only acquired from us. We also have an active version, called Dynamic Hull Vane, which is particularly suitable for vessels in the size range 20-60 m such as patrol vessels, mine countermeasure vessels and unmanned surface vessels.

NN: You have exhibited at Posidonia and at the MAST Conference, both in Athens this year. Why is Greece so important for Hull Vane BV?

BB: The Greek, like the Dutch, have saltwater running through their veins. Both are seafaring countries with economies which depend a lot of safe seas. We see a great potential in Greece, on one side on the passenger vessels and yachts, but equally so for the Hellenic Navy and the Hellenic Coastguard. The Hellenic Navy has three very relevant programs at the moment, where Hull Vane could play a role: the FDI frigates built by Naval Group, the future corvette program, which is still in the bidding phase, and the midlife upgrade of the MEKO class frigates. We hope to do a retrofit on a smaller existing naval ship to familiarize the Hellenic Navy with Hull Vane® in the short term, so they can incorporate it in their future newbuilds. We had the pleasure to meet with the Minister of Migration, Mr. Notis Mitarachi, at the MAST exhibition, and he very quickly saw the potential of Hull Vane for the Hellenic Coast Guard fleet.

NN: Do you think there’s a high probability of success?

BB: Yes, we do. We have met with the naval architecture department of the Hellenic Navy in Athens, and they are very interested in applying the Hull Vane solution. The next step is finding the funds to do an installation. Hull Vane is an investment in a significant capability improvement, which pays for itself due to the energy savings provided, but it still needs to be acquired in the first place. We also expect that the European shipbuilders which have built – or are building – ships for the Hellenic Navy, such as Naval Group, Damen Naval and TKMS, will be interested to see which benefits Hull Vane can bring to their ships. With Damen Shipyards, we are working on a retrofit of a Hull Vane on one of the 108 m Holland Class Oceangoing Patrol Vessels, which will take place early 2023.

NN: If your technology has so many benefits, why isn’t everyone applying it already?

BB: That’s exactly what our customers ask, who have experienced the Hull Vane. Believe it or not, often even those who are not customers – but should be – ask us this question. In our eight years of experience with Hull Vane, having sold more than 60 units, we have found that the smaller the organisation, the easier it is to get Hull Vane implemented. Navies and naval shipbuilders are almost by definition large organisations, so this takes more time, but based on all the CFD studies and model tests we have done, we are absolutely certain that you will see very many Hull Vanes on naval ships in the future, just like you often see bulbous bows, fin stabilizers and the latest signature-reducing systems. Hull Vane performs all of those functions in one solution: resistance reduction, seakeeping improvement and signature reduction.

While a few years ago, fuel consumption was seen as not so relevant to defence, now it is widespread knowledge that dependency of fossil fuels is a liability for those countries which do not produce oil, and Hull Vane helps reducing this liability. We’ve seen the tanks stranded in Ukraine without fuel, and this can of course happen at sea as well during a conflict, when supply lines come under stress.

NN: Can you show anything about these CFD studies?

BB: Most of our work is under non-disclosure agreements of course, but you can find interesting studies regarding naval ships in the “papers” section on our website. I would also recommend the video we made of the Hull Vane retrofit on the French patrol vessel Thémis, as it show how Computational Fluid Dynamics predictions correspond with what you see (and hear) at full scale. It shows very well the difference before and after installation.

This vessel has a hull shape and a speed range which is very typical for naval ships, and indeed many of our CFD studies show similar results, but with somewhat lower resistance reduction percentages (8-20%) on more slender hulls such as frigates, when comparing to beamier OPVs (10-25%).

NN: We have seen a tanktesting model of the FDI with Hull Vane® at the Naval Innovation Days of Naval Group. Can you tell us anything more about this project?

BB: Due to NDA’s, I can’t comment on any specifics, other than that I was there as well and it was a great honour to talk about our technology with the French Minister of Defence. We have a good relationship with Naval Group, which can be seen in the paper which we published with them, and which is available on our website. They also presented at Euronaval 2022 their concept ship “Blue Shark” with a Hull Vane® for improved signature reduction, stability and endurance. I know that they are very keen to move from model tests to a full scale application, but of course they need a client willing to innovate with them.

BB: We know from military history that the speed at which innovations can be implemented is a determining factor in a global conflict. During peace time, our navies do a lot of training missions, and rightfully so. Wouldn’t it be great if we would also train our defence material organisations by giving a specific task, a budget and a timeframe? We have possible Hull Vane projects on the shelf for every European Navy and Coastguard, and many others. It is exceptional for us to receive a direct phone call from a navy’s logistic department, while it should be very normal. We are ready for it! 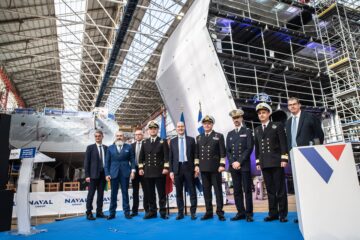