The Turkish Navy is counting down the days for the commissioning of its future flagship TCG Anadolu. The Landing Helicopter Dock (LHD) has completed the first helicopter landing and takeoff exercises during sea trials, marking an important milestone.

The Turkish Ministry of Defense announced on Twitter that the Turkish Navy’s AH -1W Super Cobra and SH -70B helicopters landed on TCG Anadolu on Nov. 18, 2022. The event marks an important milestone for Anadolu, which is currently undergoing sea trials.

Another milestone TCG Anadolu has achieved was deploying Turkiye’s indigenous ALTAY Main Battle Tank took place on October 07, 2022. As part of this activity, the Altay tank, which was transferred from the shipyard by an LCM (Landing Craft Mechanized), was deployed to the LHD and then returned to the LCM and a landing operation trial was carried out to the shore.

On 17 September 2022, the Turkish Defense Industry Agency (SSB) hosted a press tour aboard TCG Anadolu, and the head of SSB, Prof. Ismail Demir, revealed that they are planning to deliver the LHD to the Turkish Navy by the end of this year.

On 04 March, the Turkish Navy raised the Turkish flag on the LHD, and the sea trials has begun in June 2022.

TCG Anadolu to be the first UAV Carrier in the world

TCG Anadolu has reportedly planned to be transformed into a drone carrier after the U.S. broke the partnership with Turkiye on the F-35 JSF project. As a result, Baykar, a Turkish drone manufacturer, announced in early 2021 that it was working on a specific UCAV called TB-3, an improved and folding-wing version of the combat-proven TB2 drone that would be deployed aboard TCG Anadolu.

Ismail Demir stressed that the UAV integration system process will continue after the delivery of the Anadolu. She will be able to conduct air operations with TB-3 drones after the system integration is completed. He also underlined that Bayraktar KIZILELMA (MIUS) unmanned fighter jet and HURJET aircraft will be deployed to the future LHD.

“In the next phase, in addition to the TB3 drones and helicopters, KIZILELMA and Hürjet will be capable to take off and land from these vessels. The design works still continue.”

You can read details on how the Turkish LHD will recover and launch drones here. 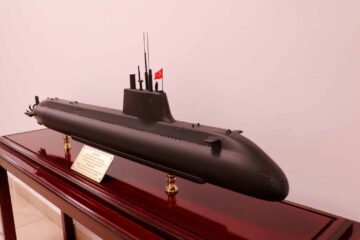