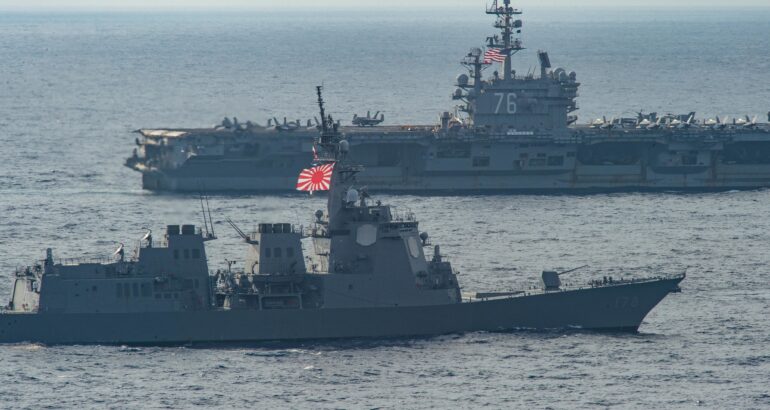 Keen Sword 23 was designed to enhance Japan-U.S. readiness and interoperability while strengthening the bilateral relationship and demonstrating U.S. resolve to support the security interests of Allies and partners in the region. Keen Sword does so by providing militaries opportunities to train across a variety of mission areas in realistic scenarios, enhancing readiness, interoperability, and building credible deterrence.

“As Allies working together we demonstrate our collective resolve in facing shared maritime challenges. While this exercise has benefitted us tactically and professionally, it also is a powerful symbol of the strength of a force all committed to the same ideals that keep this region secure and stable.”

“I appreciate that we had the occasion to work with all members of CSG 5 on USS Ronald Reagan, and we received knowledge and lessons learned with their support through Keen Sword 23. This exercise contributed to improving the tactical and operational capabilities of the JMSDF, and enhanced the effectiveness of bilateral operations between Japan and the U.S. We are facing big challenges in the region, but our relationship is stronger than at any time in history, and is contributing to the strengthening deterrence and response capabilities of the alliance, and to the peace and stability of the Indo-Pacific region.”

This year, for the first time ever, the JMSDF embedded an Information Warfare Commander (IWC) and planning staff into CTF 70 IW team where they made great progress in areas such as information sharing, electronic warfare, and expanding collective warfighting capabilities. This afloat opportunity built upon the success of several routine exercises and exchanges held in Yokosuka over the past 18 months.

“Having the JMSDF IWC and his team of experts onboard USS Ronald Reagan working alongside our team has been a tremendous success,” said Capt. Kurt Mole, CSG 5 IWC. “We learned so much from each other and were able to leverage the strengths of each team. This was a significant advancement of our IW collaboration and I’m excited to continue moving the relationship forward.”

“We have stood side-by-side and we are aligned to stand together in the future,” said Capt. David Tietzel, Commander, Australian Maritime Task Group (COMAUSMARTG). “Our teams that worked on USS Chancellorsville and USS Ronald Reagan have brought back valuable lessons learned. We want to continue being the link across different domains bringing our warships and people together.”