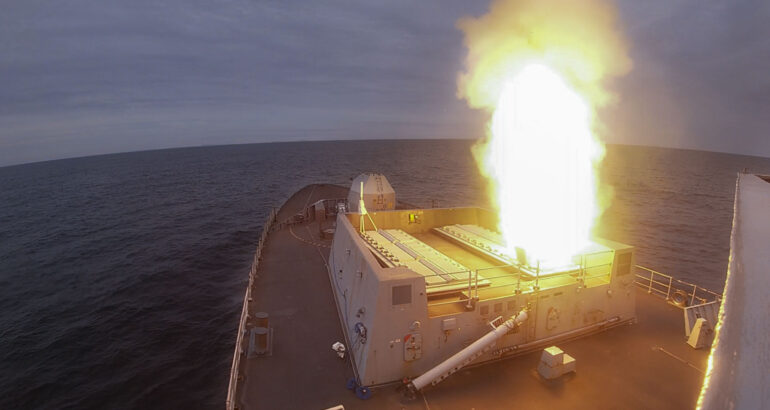 HMS Dragon a Royal Navy Type 45 destroyer carries out a successful firing of a Sea Viper missile in the Atlantic off the Hebride Isles. 27 May 2021. File picture: Royal Navy

On 08 December 2022, the OCCAR-EA Director, on behalf of the UK MoD, signed the Amendment 10 of the Sustainment & Enhancement (S&E) contract with the Eurosam’s consortium Managing Director (Mrs. Eva Bruxmeier).

The contract Amendment saw the UK joining the multi-National partnership between France and Italy for the Production of the Aster Block 1, with a new contract managed by MBDA trough Eurosam.

The contract will oversee, in the framework of the Aster missiles Mid Life Update (MLU) for UK, the conversion of Aster 30 warheads to Aster 30 B1 Naval UK standard: autopilot software development and logistics updates, whilst the munition assembly will take place in UK premises, at Defence Munition Gosport (DMG).

The close collaboration  between OCCAR, the UK MoD and DE&S in particular, plus the great level of effort from DGA (FR) and SEGREDIFESA (IT), played a key role in the achievement of this major milestones after a lengthy and complex negotiation period with industry.

Representatives from the Participating State could not join the ceremony in person but expressed their high satisfaction at the accomplishment of this long-awaited achievement.

This programme further strengthens the long-lasting relationship and strategic cooperation between France, Italy and the UK in the ammunition domain and paves the way for future Tri-National achievements and partnership opportunities.

The Sea Viper Evolution programme was initially announced by the United Kingdom’s Ministry of Defence in May 2022.

The upgraded defence system, using the Aster 30 Block 1 missile previously used only in French and Italian land systems, will help the Royal Navy combat the increasing threats posed by anti-ship ballistic missiles at sea by developing the missile into a maritime variant. The French Navy (Marine Nationale) and Italian Navy (Marina Militare) are also switching to the new missile for their Horizon type air defense destroyers, FREMM frigates and for the Italian PPA Light Plus and PPA Full.

The Sea Viper Evolution programme follows the recent contract awards to introduce the Common Anti Air Modular Missile (CAMM) into the Type 45. This will bring the missile load of the Daring-class destroyers from 48 to 72 missiles.

Contacted by Naval News, an MBDA source explained that the main differences between legacy Aster 30 and the Block 1 variant are in the seeker software and missile computer software. There are also some minor hardware modifications such as the warhead: It combines a proximity fuse with blast fragmentation warhead. While Aster 30 is limited to “air breathing target” or ABT (such as fast jets, aircraft, helicopters, anti-ship and cruise missiles), Aster 30 Block 1 can intercept both ABT and short range ballistic missiles (Scud class / 600 Km range). The two missiles otherwise share the same range (>120 Km) and speed (Mach 4.5).

Aster 30 Block 1 missiles have been in service with French and Italian SAMP/T (land based) systems for several years and have proven successful ballistic missiles engagements.