Home» News»Which Maritime Roles for the USAF’s New B-21 Raider?
A B-21 Raider sits in a hangar. The new stealth bomber was revealed to the public at a ceremony December 2, 2022, in Palmdale, California. Photo: USAF Palmdale, Calif. Designed to operate in tomorrow's high-end threat environment, the B-21 will play a critical role in ensuring America's enduring airpower capability. (U.S. Air Force photo)

Naval News reached out to the RAND Corporation, an independent non-profit Think Tank, for comments on how the U.S. Air Force’s new B-21 “Raider” stealth heavy bomber can operate with the U.S. Navy in a maritime role. What payloads might the B-21 carry for Anti-Ship strike? What maritime missions might the B-21 be called upon by the U.S. theater commander? How can the B-21 contribute to Anti-Access/Area Denial penetration? And how can the B-21 fulfill these roles that the B-1, B-2, and B-52 heavy bombers cannot?

To keep up with pacing threats from non-allied foreign nations, the United States Air Force (USAF) decided to build and acquire about 100+ new stealth heavy bombers, a tailless flying wing called the B-21 “Raider” named after the famous “Doolittle Raid” of World War Two.

The B-21 is supposed to be smaller than the B-2A “Spirit” stealth bomber that preceded it, in which only 20 B-2s are in USAF service, making the B-2 a very expensive and precious heavy bomber asset. As such, the payload of the B-21 is also supposedly smaller, but this will be remedied with more production numbers than 20 B-2s. Nonetheless, many features, technical specifications, and performance characteristics of the B-21 remain a closely guarded secret and not disclosed, inviting “educated guesses” by analysts and journalists. The B-21 “Raider” is said to be a lot stealthier than the B-2A “Spirit” that it will eventually replace and Northrup Grumman is the manufacturer of both flying wing stealth bombers.

The USAF rolled out the B-21 to the public in order to commence flight tests trials starting in 2023. Even so, the rollout was at night amid bright spotlights in the audience’s faces to mask the design and features of the B-21—the B-21’s rear and top were not shown to the public—only the front profile as seen in the hangar photo above. More details of the rollout and the B-21 “Raider” can be found at Air and Space Forces Magazine.

The B-21 “Raider” is dubbed as a “Sixth-generation” aircraft that contain features and characteristics distinct from Fifth-generation aircraft. As of December 2022, Northrup is said to have six B-21s in various stages of assembly.

Naval News Reaches Out to RAND

Dan Norton, Senior Management Scientist at RAND Corporation, responded to Naval News’ inquiry in mid-December 2022 about how the B-21 might operate in a maritime role.

Dan Norton (RAND): The B-21 will have state-of-the-art stealth capabilities that should allow it to operate in contested environments that would be very challenging for the B-1 and B-52. The Air Force plans to buy the aircraft in large numbers, allowing it to generate far more sorties than the B-2. Thus, it should have some important advantages over legacy aircraft.

In a major conflict, it may be used to attack some enemy surface combatants and provide ISR on others, acting in concert with U.S. Naval forces to achieve campaign objectives.

Naval News: When would you use the B-21 to showcase U.S. airpower for maritime might and when might you use the other USAF heavy bombers and why? Any “stealth bomber overkill?“

Dan Norton (RAND): The U.S. has used bomber task forces operating in Europe and the Pacific to deter adversaries and reassure allies for the last few years. I expect the B-21 will be used in the same way. The choice of bomber to use could be driven by unit availability, the suitability of regional basing, the types of operations planned, and other factors. I don’t see why the B-21 would be overkill. Its presence might indicate the importance of the operations to DoD [Department of Defense].

Naval News: What do you envision the B-21 doing and the payload it might carry to benefit U.S. naval forces and act as a global deterrent?

Dan Norton (RAND): I expect the B-21 to fulfill many of the same roles as the current bombers, deterring conflict and countering adversary land, sea, and air power if deterrence fails. I anticipate it will carry JASSM-ER, LRASM, and a variety of direct attack weapons such as JDAM. It could even carry future hypersonic weapons. The aircraft can enhance both conventional and nuclear deterrence.

Naval News: How does “6th-Generation” technology and optionally-manned change the equation as a game changer and a force multiplier for the Combatant Commanders?

Dan Norton (RAND): As the B-21 is a much newer design, it should be easier to maintain. That combined with the much larger planned force structure, should allow the fleet to generate far more sorties in a conflict, providing the theater commander with more options for achieving operational objectives. The implications of it being optionally-manned remain to be seen. The aircraft will still be very expensive and thus it’s not clear that commanders will be willing to subject even unmanned versions to undue risk.

Naval News: In RAND’s view, how many B-21s should be acquired to make a global maritime difference in both the Pacific and the Atlantic?

Dan Norton (RAND): I assume that the planned buy is adequate to meet these demands. I have not looked at that issue and am not aware of any studies that have.

Naval News: How does the B-21 play a maritime deterrence role compared to smaller armed UAVs, UCAVs, and stealth fighter/bombers?

Dan Norton (RAND): The B-21 combines sensors and a large weapons bay, allowing it to find, track, and engage a wide variety of targets. For example, a B-21 with LRASM could be used to sink large surface combatants. In contrast, other platforms with far smaller munitions may be less effective in that role. The B-21 is also likely to have a longer range than most of these other platforms, allowing it to engage targets over a wider area. Its signature could allow it to operate in areas denied to some platforms. These factors should enhance its contributions to maritime deterrence.

Naval News: Should the U.S. DoD invest in such a new heavy stealth bomber force compared to building new carriers, warships, and submarines for maritime might? Why or why not?

Dan Norton (RAND): These are very different platforms with different strengths and weaknesses. Surface combatants can defend airspace 1,000 miles from the nearest land base for weeks on end, something that can be difficult to do with the others. Submarines can often operate close to adversary territory to launch attacks on adversary forces. That can be difficult for surface combatants and non-stealthy aircraft.

Bombers have advantages in terms of speed, range, flexibility, and delivery capacity. A surface action group at home port at the start of a conflict could take weeks to arrive. A bomber could be there in a day. Aircraft can be rapidly moved to attack a new target set hundreds of miles away in a matter of tens of minutes, something the other assets can’t match. They can also be rapidly reloaded, something that can require a multi-week return to homeport for a ship.

The nation has assembled a mix of types of forces to achieve its objectives. I expect that to continue.

Naval News: Please give a scenario as to the pecking order for using the B-21 “Raider” at the top of the pyramid compared to a MQ-9 “Reaper” or a XQ-58A “Valkyrie” for maritime operations.

Dan Norton (RAND): MQ-9 Reapers are not stealthy. They carry relatively short-range weapons. I’d be surprised if they played a significant role in a major conflict with a near-peer adversary.

Aircraft like the XQ-58 could be used with Navy and Air Force fighters in a variety of roles (providing additional weapon carriage, additional sensors, electronic warfare etc.) in maritime operations.

The B-21 is far and away the most capable of these. I expect it would be used as outlined above in maritime operations in a major conflict.

Dan Norton (RAND): The U.S. has a long history of operating forces in proximity to potential adversaries while staying in international or friendly airspace. They do this safely and professionally in accordance with international law. I don’t see any reason that the B-21 wouldn’t be used in the same way.

Naval News: Any other comments or suggestions for using the B-21s in the maritime role?Dan Norton (RAND):Multi-domain operations are an increasing focus in the Defense Department. These can leverage the respective strength of forces in different domains to achieve effects that may not be feasible in one. I expect this to continue. B-21s could be used with Navy and other forces in a variety of ways as outlined above.

As Naval News reported, the B-21 will not have a UCAV variant and instead will be “optionally-manned.”

With manned-unmanned teaming (M-UT), the B-21(s) may be able to control smaller UCAVs to act as fighter/bomber escorts, Intelligence, Surveillance, Reconnaissance (ISR) platforms, Combat Air Patrols (CAPs), decoys, Electronic Warfare, and “First Strike” packages, leaving the B-21(s) at a safe distance back to observe, identify, instruct, assess, and control and coordinate the UCAVs.

In fact, an Air and Space Forces Magazine story on December 8, 2022 discusses a B-21 scenario of M-UT in a potential maritime role, “…an unclassified workshop that gathered Air Force leaders, planners, and operators along with industry partners, offers some insight into what might be considered [in a manned-unmanned teaming with the B-21 for a B-21/UCAV strike package]. “The three-day workshop, held this summer [2022], was meant in part to develop concepts for what the Air Force calls `autonomous collaborative platforms [ACPs]’—relatively cheap drones that can fly alongside manned aircraft, operating with some level of independence.

“The exact rundown of the intended missions and numbers of drones the teams in the workshop decided on are as follows:

The above ACP packages are just a wargame scenario involving smaller UCAVs that are also still under development. As the Sixth-generation B-21 begins trial production and flight testing, theater and mission U.S. commanders will be envisioning and planning maritime missions that the B-21 can assist in the INDO-PACOM region and around the world. 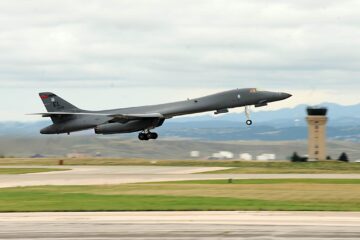 Xavier Vavasseur 06 Jul 2020
A USAF B-52 Stratofortress bomber participated in a maritime integration exercise with the USS Nimitz and USS Ronald Reagan carrier strike groups in the South China Sea.