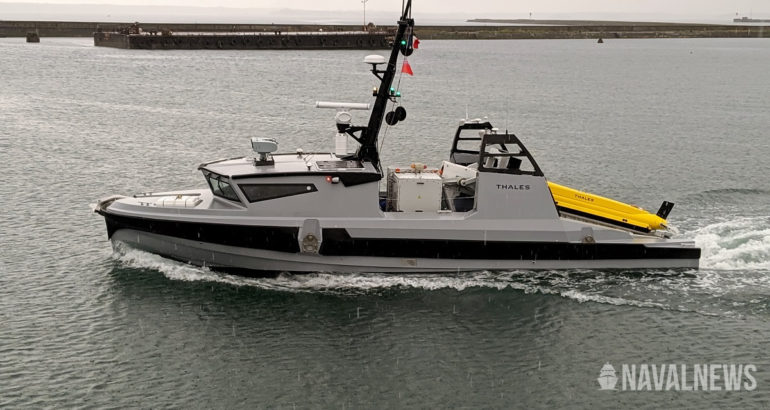 During the NATO Dynamic Messenger 2022 exercise, held last September in Portugal, Thales confirmed the interoperability of its MiMap and M-Cube command and control (C2) mine countermeasure system with other industry components and NATO standards.

Dynamic Messenger is the first full NATO operational experimentation exercise that specifically focuses on integrating unmanned systems into the maritime domain, and more specifically NATO Task Groups at sea, with more than 18 ships, 48 unmanned assets and 1500 personnel from 16 NATO nations participating. The aim is twofold: to think about the naval combat of the future, and to test operationally the equipment, vehicles and systems that shape it today.

M-Cube, the Mine Counter Measure mission management system combined with MiMap, the mission analysis tool, allowed the data collected and processed to be integrated into the NATO network C3MRE*/CATL**, which interfaced industrial solutions such as Sonadive & BIONDo AUV from CMRE*** with NATO navies. This exercise was also the opportunity to demonstrate the ability of Thales systems to read foreign sonar data coming from various AUVs.

The Group successful demonstration of the interoperability of its solutions during this exercise is a great new step towards collaborative combat.

MiMap and MCube are part of the first world-class maritime system of system of drones tested at sea being delivered as prototype & demonstrator to the Royal Navy and to the French Navy while waiting a FOC delivery. Demonstrated for Mine Counter measure domain, these Thales solutions could be used for further applications still to be developed and demonstrated, such as Anti-Submarine Warfare or Seabed warfare.

MiMap is a mission analysis tool, which allows operators to analyze sonar data either in real-time or recorded during a mission. MiMap makes it possible to efficiently investigate the seabed, classify and localize contacts and report changes from the last known state of an area.

M-Cube, the Mine Counter Measure mission management system is deployable on Conventional MCM Vessels as well as Autonomous MCM Systems. Combined with MiMap, it reduces the cognitive load of commanders and operators, enabling them to make effective and efficient decisions in a threat environment. It is the world’s most capable and agile mine countermeasures C2 (command and control) system, with the potential to provide a significant technological advantage to the user.

MiMap and M-Cube are two bricks used in the Franco-British Maritime mines counter measures programme conducted through OCCAR. Thus, this demonstration also enlightened the interoperability of MMCM solutions with other equipment and NATO standards.