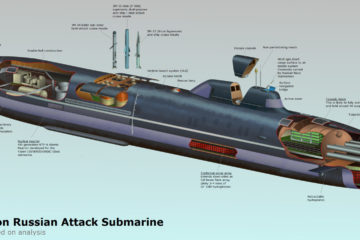 The Laika class submarine follows on from the Pr.885/885M Severodvinsk Class cruise missile submarines. But it is not a straightforward successor. It was first revealed in the background of a media report on a Russian defense exhibition in December. Although it has not been officially confirmed the new design is likely to be the next generation Russian attack submarine project known as Husky.