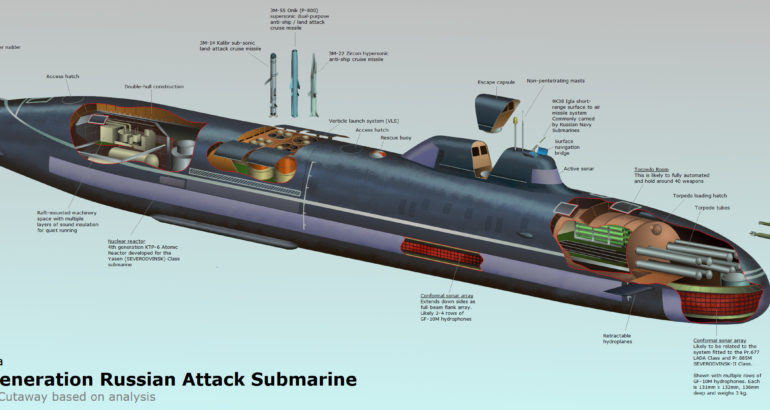 The Laika class submarine follows on from the Pr.885/885M Severodvinsk Class cruise missile submarines. But it is not a straightforward successor. It was first revealed in the background of a media report on a Russian defense exhibition in December. Although it has not been officially confirmed the new design is likely to be the next generation Russian attack submarine project known as Husky.

The Project 545 ‘Laika’ was first revealed in the background of a media report on a Russian defense exhibition in December. Although it has not been officially confirmed the new design is likely to be the next generation Russian attack submarine project known as Husky. The name Laika refers to a breed of Siberian hunting dog very similar to the husky.

The type follows on from the Pr.885/885M Severodvinsk-class cruise missile submarines (SSGN). But it is not a straightforward successor. Instead, it is the cheaper little brother, intended as a replacement for existing attack submarines. As the Severodvinsk-class (also known as Yasen-class) replaces the Oscar-II SSGNs, Laika will replace the Akula and Sierra classes.

Despite efforts to modernize, the backbone of Russia’s attack submarine fleet are still Cold War types. The end of the Cold War was a bad time for the Russian submarine force. Budgets were cut, fleets were slashed, most new construction was shelved and new projects halted. What was left was a shadow of what went before.

While the submarines which survived were generally the best and most modern, their time at sea, a major factor in combat effectiveness, was greatly reduced. The bad times lasted through the nineties and most of the 2000s. There were years when even the nuclear deterrent submarines barely put to sea.

Eventually things began to improve in the last ten years. In particular the nuclear attack submarine (SSN) fleet has been operating more adventurously in the North Atlantic. And the submarine navy has regained some operational experience firing cruise missiles at Syria. But the nuclear powered attack submarine fleet is still increasingly dated. Still potent, still capable, but largely stuck in time. Laika will be a much needed replacement.

The submarine model shows a relatively conventional layout with hints of both the Akula and Severodvinsk classes. Like Akula it will revert to the traditional Russian double-hull convention. And also appears, like Akula, to have a chin mounted sonar. The first Severodvinsk boat had introduced a spherical array, taking up the entire bow much like older US Navy designs. That appears to have been dropped in favor of a conformal array in subsequent Severodvinsk-class boats. But they were left with flank torpedo tubes angled outward to go around the ghost of the spherical array.

Laika starts life with the conformal array so the torpedo tubes can, logically, be accommodated above the sonar like on the Akula. This will have some advantages, allowing faster torpedo shots and simplifying the torpedo room.

The tubes themselves are likely to all be 533mm (21″) as there has not been investment in the larger 650mm range of weapons for many years. Added to this, none of the weapons listed on the information board accompanying the model were 650mm. The most likely arrangement is this 8 x 533mm tubes. There are also likely to be some external tubes for countermeasures.

Unlike previous Russian SSNs the Laika will have a vertical launch system for cruise missiles. This is likely to share some commonality with the one on the improved Severodvinsk-class boats. But we should expect fewer silos, possibly just four. This would give a VLS load of up to 16 missiles.

Arguably the VLS will make the Laika an SSGN design. The same could be said of the US Navy’s Virginia-class. But following the logic that Laika will replace SSNs more or less 1:1, while the Severodvinsk-class is replacing the Oscar-IIs, the “SSN” label is likely to stick. And with it the doctrine of SSN usage in the Russian Navy.

Laika is from the same design bureau as the Severodvinsk-class, which shows. An interesting aspect is that Russia has two bureaus in charge of designing submarines: Rubin and Malachite. There does not seem to be any love lost between them. A third, Lazurit, was a victim of the post Cold War ‘peace dividend’ and is no longer in the submarine game. Although they have tried to get back, which would make things more interesting.

So with the Laika, Malachite has cornered the attack submarine market in Russia for the foreseeable future. And separately the deep diving midget submarine sector. Meanwhile Rubin is dominant for strategic deterrent submarines, underwater robots (autonomous underwater vehicles – AUVs) and non-nuclear submarines. This manifests itself in interesting ways in the design of the Laika.

Many western observers will be surprised that Laika doesn’t have pump jet propulsion. Pump jets are generally quieter, and thus more stealthy, especially at higher speeds. The curved propeller (screw) looks great but it is actually a bit old fashioned for nuclear submarines. Britain, and then the US and France, made pump jets standard years ago. And Russia does have pump jets on some of its latest boats. But the best explanation as to why Laika doesn’t, is because it is a Malachite design. Rubin has the technology, but there seems to be a barrier to Malachite using it. So the Severodvinsk-cClass, and now Laika, still has a curved propellers.

That doesn’t make Laika noisy. There are lots of elements and compromises involved in submarine stealth. And it’s a safe bet that Laika will be as quiet or quieter than existing Russian boats.

Some Russian sources describe Laika, or at least the Husky project, as the basis for ballistic missile submarines (SSBN) also. It will be modular in the sense that the missile compartment could be switched to a larger one for submarine launched ballistic missiles. This is unlikely to be a quick switch, and more likely different submarines would be built, but with the same fore and aft sections. This brings Malachite into the strategic submarine space. Which is currently the territory of the rival Rubin design bureau. Perhaps to return the favor, Rubin has proposed a cruise missile version of their current strategic submarine design, the Borei-class.

But with a full set of Borei-class submarines planned there does not appear to be a strong need for an SSBN version of Laika.