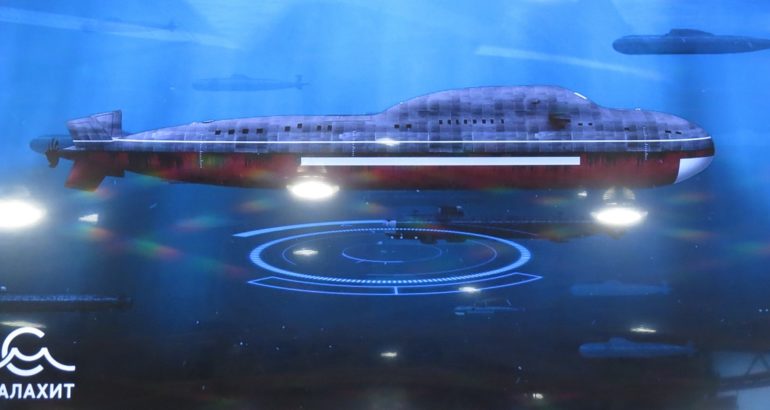 Russia is currently building fourth-generation submarines and designing fifth-generation U-boats. Little is known about the new submarines, but it is clear they will eliminate problems encountered by modern nuclear submarines, online Gazeta.ru publication writes.

There is little open information on the latest Husky-class fifth-generation submarines. Their characteristics can be only imagined. In particular, the underwater displacement is likely to comprise 12-13 thousand tons. They will have a two-section construction and the crew will number close to 90 men. They will be smaller than current Yasen-M-class SSGN of project 885M. It will increase maneuverability and stealth characteristics of new submarines.

Reports said the Husky is designed in two options. The antisubmarine option will fight U-boats, mostly SSBN of the US Columbia class and the British Vanguard.

The second option will be armed with Tsirkon hypersonic missiles to destroy big surface warships, nuclear aircraft carriers, cruisers and destroyers, universal amphibious assault ships, etc. Tsirkon has a cruising speed of over 7000 km/h and can hit targets at a distance of 1000 km.

The submarines will be less noisy than fourth-generation U-boats. They will have a composite hull. Composites will be used to make bow and stern rudders, stabilizers, mast housing, propellers and shaft lines. The materials will decrease the reflection of adversary sonars and the weight of a submarine.

The Husky will have a single integrated combat information system with artificial intellect.

Some reports said the fifth-generation submarines will have a completely new reactor instead of the water-cooled and water-moderated one (VVER). It is likely to be a development of the reactor installed in Lira-class SSN of project 705. “The main power plant of the project was a reactor and a steam generator with liquid crystal heat exchanger (lead and bismuth alloy) and a single-shaft steam turbine,” expert Konstantin Makienko said.

Besides, special operations to prevent alloy oxidizing, control its state and periodically withdraw oxides were necessary to keep the physical-chemical stability of the liquid-crystal heat exchanger.

There are grounds to believe the Husky will not face the problems. The main power plant is likely to be a single-shaft, single-reactor unit with a steam turbine and increased steam parameters.

The latest underwater detection means are of specific significance for the Husky. It is important to achieve a longer monitoring range of the underwater situation, increase the precision of coordinates and reliability of target identification. Otherwise, it would be problematic to dominate in an armed standoff with adversary submarines in the World Ocean.

“There is no doubt that domestic shipbuilders want to create a maneuverable, speedy and relatively small-displacement submarine, considerably cut the crew, introduce effective arms and complex automation. One of the main tasks is to decrease underwater noise several times against previous submarines,”

Expert Konstantin Makienko  believes that if the Husky is constructed by the modular method, the approach will boost Russian underwater shipbuilding, Gazeta.ru said.