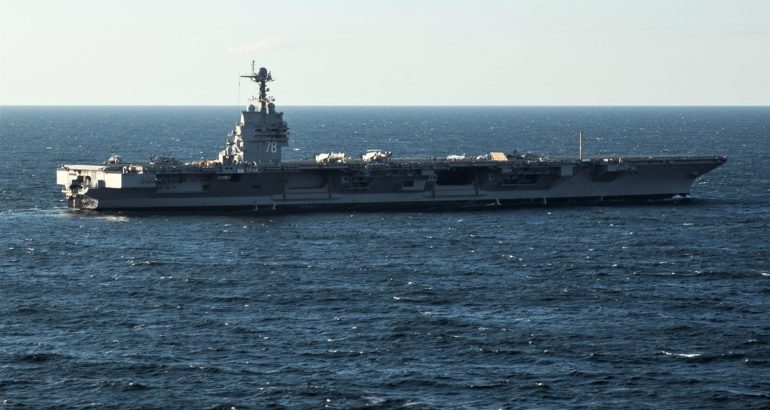 This significant milestone in the ships’ history began on July 28, 2017 with Ford’s first fixed wing recovery and launch using its first-in-class AAG and EMALS technologies.

Capt. J.J. “Yank” Cummings, Ford’s commanding officer, explained how the entire Ford crew has worked together over the last few years to reach this achievement.

“I couldn’t be more proud of our crew, their motivation is amazing,” said Cummings. “We’ve been working extremely hard to get here today, and to see this 1,000th trap completely validates their efforts and the technology on this warship.”

Lt. Scott Gallagher, assigned to VFA 34, has landed on five other carriers, but became a part of Ford’s history with his, and the ship’s 1,000, recovery.

“There are a lot of people who are working night and day to make sure that this ship is ready to go be a warship out in the world,” said Gallagher. “To be a part of that; and this deck certification is super cool. Also getting the 1,000th trap helps the ship get one step closer to being the warship that it needs to be.”

Capt. Joshua Sager, commander, Carrier Air Wing (CVW) 8, explained why his squadron’s integration with the ship’s personnel is important and how their relationship impacts operations.

“It’s great to share this moment in history with Ford. Integration between the air wing and ship’s company is crucial to the everyday success of carrier operations,” said Sager. “Completion of the 1,000th catapult and arrestment shows that the ship and her crew have tested and proven the newest technology the Navy has, and together we are ready to meet the operational requirements of our nation.”

With 1,000 launches and recoveries complete, Ford will continue its flight deck and combat air traffic control certifications in preparation to deliver to the fleet regular flight operations in support of East Coast carrier qualifications.