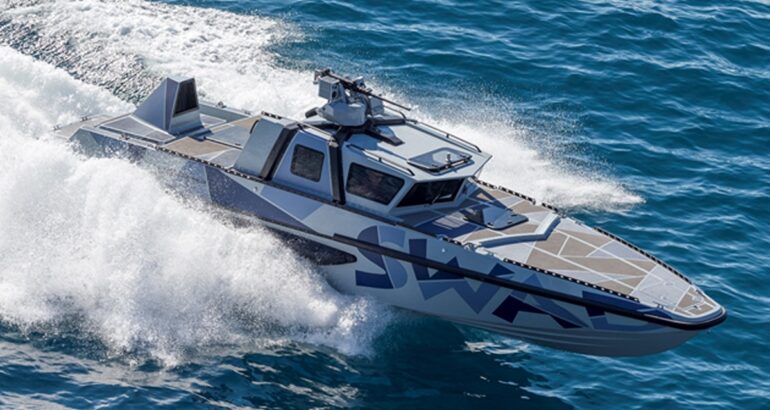 Equipped with a common architecture, the Lionfish® family of turrets has a compact and low weight structure. Leonardo picture.

Already aboard a number of naval platforms worldwide, Leonardo's LIONFISH® family of defense systems has now also been selected by the Royal Netherlands Navy.

The LIONFISH® Top is one of three 12.7mm variants in the new family of remotely-controlled naval turrets. “Ultralight” and “Inner Reloading” models are also available in the same calibre. The company also offers a 20mm “LIONFISH® 20” model.

The LIONFISH® 12.7 Top weighs less than 300 kg and is particularly effective against close threats and in asymmetric scenarios (ASymmetric Warfare – ASyW). Effectiveness and accuracy, even at long range, are guaranteed by the use of a cooled infrared sensor that integrates Leonardo’s Mini Colibrì optics. This is common across the whole turret family, which can also integrate an uncooled sensor. Depending on the technology used, the detection range can be up to 12 km.

With customers’ needs in mind, Leonardo has created state-of-the-art technologies which can effectively and accurately handle various type of threats, including uncrewed systems.

The LIONFISH® family stands out for its modularity, lightweight and common architecture, which allow the turrets to be installed and operated on board secondary platforms, both as a primary and secondary defence system, with no deck penetration. All systems in the family can self-calculate firing solutions and engage fast-moving threats, even when installed on high-speed platforms.

Drawing on its experience developing advanced technologies such as the OTO 76/62 Super Rapido and the OTO 127/64 LW Vulcano, Leonardo has developed its new defence systems to meet market requirements, that are increasingly looking towards compact and stealth technologies, including to equip uncrewed platforms. At the same time the company continues to advance its product reliability, optimise maintenance times and drive competitiveness.