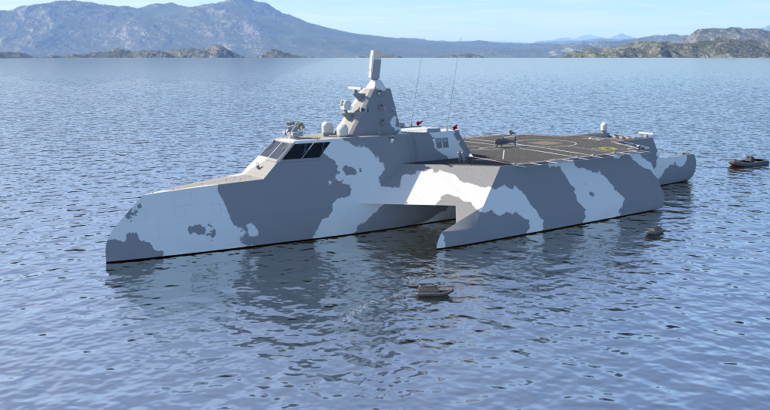 Steller Systems and Thales have launched their design for TX Ship, a ground-breaking vessel that will help navies transition to unmanned operations.

The design, which was officially unveiled at the Maritime Capability Conference at DSEI 2019 on Monday, is designed to operate unmanned, but with the intention of operating as a lean-manned vessel with 15 crew in the first instance.  Successful and continued operation of TX Ship will give forward thinking navies a clear route to gain confidence in, and to move towards, fully unmanned autonomous naval operations in a cost-effective manner.

TX Ship is a fully sensorised multi-role trimaran, capable of operating at reach, alone or as part of a task group.  The ship possesses an unusual high capacity, fully-automated mission bay capable of hosting and deploying a large number, and multiple types, of manned or unmanned mission packages.  The stern access and moon pool features enable flexible and covert deployment of a wide range of current and future unmanned aerial, surface and subsurface vessels. At a length of 70m and 600 tonne displacement, TX Ship has a top speed of 30 knots, a design cruise speed of 18 knots, a range of 6000nm and an endurance of 20 days (manned) or 40 days (unmanned).

The vessel has been designed to be a multi-role platform, including Mine Countermeasures (MCM), Intelligence, Surveillance & Reconnaissance (ISR), strategic Anti-Submarine Warfare (ASW) and patrol.