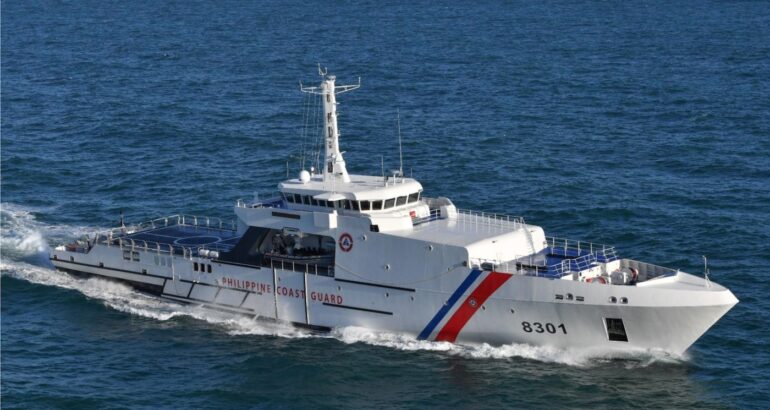 Built in France, the BRP Gabriela Silang arrived in Manila in April 2020.

The OCEA OPV 270 is a world premiere state of the art offshore patrol vessel, selected by the Philippine Coast Guard after an international competition for its exceptional performances, matching the demanding operational requirements of their missions. The first year of operations confirmed that the vessel is more than capable to perform beyond its contractual specification of 20 knots of speed, a range of 8000 nautical miles at 15 knots and an endurance of up to 5 weeks of operation.

The missions fulfilled before and during the COVID19 pandemic also confirmed its excellent sea keeping ability, its maneuverability, its versatility and the great comfort on board, an important factor for the 70 crew and personnel on those long missions.

The lightness of OCEA solution is a key asset to enable such performances. The hybrid diesel-electric propulsion associated to the optimized weight of the Gabriela Silang allow significantly lower fuel consumption and maintenance costs than an equivalent steel hull ship, as outlined by the Philippine Coast Guard during the recent anniversary of the institution.

The specific conception of the OCEA OPV 270 will, over 20 years of operation, allow for a CO2 emission reduction of about 20 400 tons, equivalent to approximately 40% reduction by comparison to a similar size steel vessel, for equal performances.

This OPV is also equipped for disaster relief thanks to its helideck and hangar, its survivors’ room capable of accommodating 35 rescued persons, its sickbay and its Hyperbaric Chamber useful for treating diving incident. Furthermore, the Gabriela Silang is capable of responding to marine environmental pollution such as oil spills using its onboard containerized anti-pollution equipment. For intervention, the vessel holds two onboard 9-meter Rigid Hull Inflatable Boats (RHIBs) capable of 40 knots and with modular outfitting for rescue or law enforcement operations.

Hull Vane to be Fitted on Royal Netherlands Navy OPV