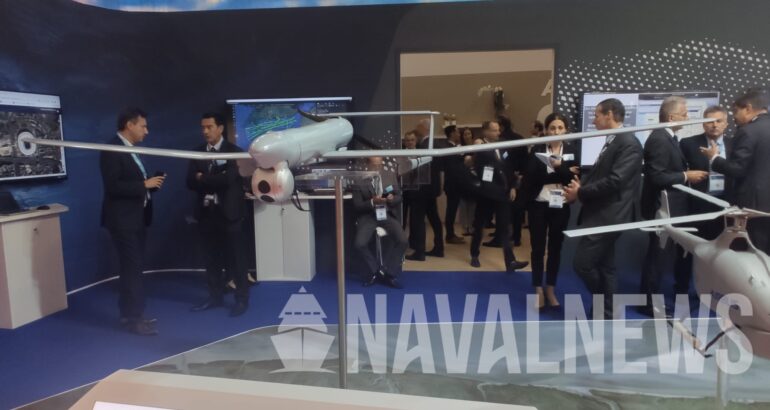 SURVEY Copter, an Airbus subsidiary, has developed a new configuration of its ALIACA range of light tactical UAVs.

ALIACA ER, for “extended range”, is a new configuration of the ALIACA Evo, a light tactical UAS developed by SURVEY Copter. The ALIACA Evo has been selected by the French Ministry of Defence to equip ships of the French Navy as part of its SMDM (système de mini-drones de la marine) programme.

The ALIACA ER is a high endurance system capable of carrying out 6-hour missions within a 100km (54 NM) range.

Like all ALIACA UAS, the ALIACA ER is launched by a catapult and ends its flight with an automatic net recovery.

With a maximum take-off weight of 16 kg and a wingspan of 3.6 m and a length of 2.2 m, the ALIACA ER is powered by a powerful thermal engine propelled by kerosene. The system can be easily and quickly deployed by only 2 operators.

This dual-sensor system is capable of performing the most demanding intelligence, tracking and target tracking missions. It is equipped with a high performance gyrostabilised electro-optical/infrared (EO/IR) payload and an Automatic Identification System (AIS) that can detect vessels within a range of several hundred kilometres.

Also easy to use, the ground station allows the operator to continuously monitor the automatic flight of the UAS, while receiving in real time, day and night, the images and AIS data collected by the onboard sensors.

It will allow users to carry out long-range missions for up to 6 hours:

ALIACA as a range of SURVEY Copter systems

ALIACA ER is the latest addition to a range of light tactical UAVs with over 10 years of experience.