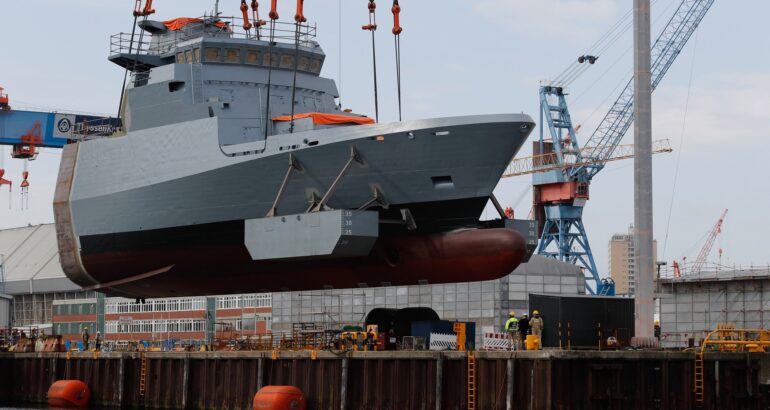 The forward half of K130 Batch 2 corvette "Karlsruhe" is lowered in the water in Kiel on August 14, 2021. German Navy picture.

The German Navy is set to receive their new Braunschweig class corvettes at least two years behind original schedule. Commissioning of the first new corvette “Köln” was originally anticipated by 2023, but this is will now occur in 2025 at the earliest, with delays affecting the next two hulls as well.

German defence magazine “Europaeische Sicherheit Und Technik” (ESUT) first reported in late September on increasing difficulties concerning the integration of the command and control (C2)-systems for the K130 Batch 2 vessels. The article quotes prime contractor Naval Vessels Luerssen (NVL) as stating that these problems are now ensured to result in delays handing over the first three hulls of the order. NVL is further cited how “various solutions are being assessed” and the company is “in close contact with the customer” over the matter. The most recent report on significant defence projects by the German Ministry for Defence from June 2022 first identified “delays for boats 6 to 8 of ca two years, due to inadequate and insufficient services of the contractor for the command and control-system”. The report continues “A further delay (…) remains possible.” and identifies cost growth of now 401 million Euros, or 16% compared to the original budget allocation.

The contract includes five new Braunschweig class, also known as K130 class missile corvettes numbered hulls 6 to 10 joining five existing boats originally built and commissioned between 2004 and 2013. Presumably the remaining two boats have not yet advanced sufficiently in construction to be impacted by these delays. ESUT identifies two principal factors impacting the delivery schedule. Firstly, the two subcontractors responsible for C2-integration, Atlas Elektronik and Thales, experience disagreements over workshare responsibilities. Atlas provides software for the program, with Thales providing related computer hardware. Secondly, the German Ministry of Defence (BMVg) as customer had revised requirements for IT standards because of the changed security environment in Europe after Russia’s invasion of Ukraine in February 2022. Atlas and Thales are finding it difficult to meet the changed requirements, with legal action over the disagreements also implied.

The problems are notable because an accelerated purchase of five more K130 corvettes was previously touted by both industry and political decision-makers as a low-risk effort. The aim was to quickly provide the German Navy with a proven and reliable warship design to meet national and NATO commitments. As such the effort was passed without competitive bidding, a decision that resulted in a legal challenge by German Naval Yards Kiel (GNYK) over missing out on a contract worth at least two billion Euros, and subsequent inclusion of the yard in the construction process. Changes from the first batch were portrayed as focusing on replacing obsolete equipment, such as installing the newer TRS-4D radar in place of the TRS-3D present on batch 1-hulls. The German Ministry of Defence most recently considered ordering a further five corvettes to replace the first batch now in service and skipping a needed mid-life update (MLU) for the original boats. How the present difficulties will affect this planning remains to be seen.

Posted by : Alex Luck
Alex Luck is a freelance writer focusing on German military modernization, NATO and naval programs worldwide, particularly with the Chinese Navy (PLAN). Originally from Germany Alex has an MA in Political Science and Modern History and is presently based in Brisbane, Australia.