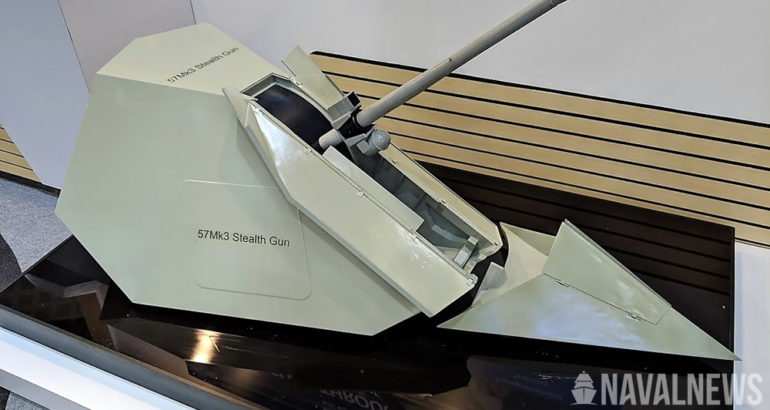 Naval News learned during LIMA 2019 that all 6 main guns for the Royal Malaysian Navy (RMN) 6 LCS Frigates have already been produced by BAE Systems Bofors in Sweden. LIMA 2019 was the Langkawi International Maritime and Aerospace exhibition held last week in Malaysia.

6 “Littoral Combat Ship” Frigates are currently under construction at Boustead Naval Shipyard (BNS) in Lumut. The vessels are based on Naval Group’s Gowind corvette design. The French shipbuilder is the main sub-contractor.

Naval News further learned that the first gun system has already been delivered to BNS, and that it should be installed shortly aboard the first of class frigate, the Maharaja Lela. We learned from various sources at the show that the vessel is expected to start sea trials in the first half of 2020. The Maharaja Lela was launched during a ceremony in August 2017 and continues it fitting out today.

The main gun system selected by the RMN for its future frigates is the 57 mm Mk 3 in a stealth cupola, similar to the guns fitted aboard the Swedish Navy’s Visby-class corvettes. The internals of the gun are similar to the regular 57mm Mk 3 (and the US Navy’s Mk 110) but its stealth cupola helps achieve a lower radar cross section for the vessel. The low observability requirement for the Malaysian LCS Frigate were very stringent.

The Bofors 57 Mk3 naval gun system fires four rounds per second and can switch immediately between ammo types, including smart 3P all-target ammunition. According to BAE Systems, this delivers seamless targeting of air, land and sea-based threats. This high rate of fire and immediate switch capability provide superb survivability and tactical freedom at all levels of conflict. Its 3P ammo can be programmed for optimised effect against any target, including airburst patterns for new threats that were previously impossible to engage.