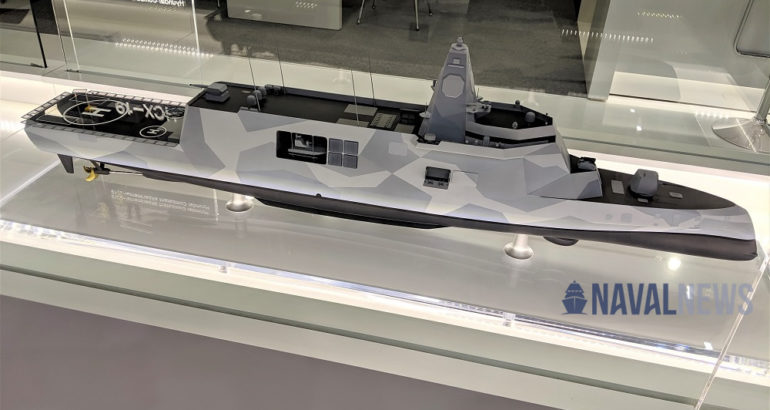 HCX-19 stands for Hyundai Combatant eXperimental 2019. It was created to show HHI’s vision of what surface combatants will look like in the 2030ies and its design relies on two concepts.

HCX-19 pushes the “drone mothership” concept (which already started to emerge in Singapore, Europe, United States and even Russia) to the extreme as it features four folding decks (located right below the integrated mast). These folding decks are used to deploy up to 8 (2 per folding deck) quad-rotor drones. HHI envisions that these drones could benefit the HCX-19 in many ways including situational awarness, self protection (with suicide drones against asymmetric threats), act as communication relay or even serve as decoys.

The other major concept that HHI is trying to convey with the HCX-19 is that the notion of “ship class” is likely to disappear and today’s corvette, frigates and destroyers will likely be merged into a single class of ship in the 2030ies: The drone mothership surface combatant that can conduct a wide range of other missions (such as mine laying or mine counter measures or search and rescue…). This would allow navies to procure 7 true multi-mission vessels instead of a fleet of 15 specialized vessels composed of corvettes, frigates, MCM vessels etc…

With these two concepts in mind, HHI started designing the HCX-19 from a clean sheet. It features a wave piercing bow (inverted bow, similar to the Zumwalt-class destroyer or Naval Group’s FTI/Belharra frigate, or HHI’s own KDDX design being proposed for the ROK Navy and also unveiled at MADEX 2019).

The design also features two mission bays: One located amidship (which can deploy two USVs), the other one below the helicopter deck (which can accommodate four mission modules in containers).

In terms of weapon systems, the scale model features a 76mm main gun by Leonardo (in its anti-air variant, able to fire Strales AAW ammunition), a laser weapon between the main gun and the bridge, remote weapon stations and MASS decoy launchers on the bridge wings, 4x NSM launchers (similar to those found aboard the Norwegian Navy’s Skjold-class), 16x VLS cells and a Millenium gun as CIWS.

The sensor suite consists in a hull mounted sonar and integrated mast combining S and X band as well as an IRST.

Sensor and weapon systems configuration can be adapted according to customer requirements.

Last but not least, HHI told Naval News that while HCX-19 is a concept ship and does not have actual specifications, they envision such as future vessel to have a length of about 110 meters, a displacement of 3500 to 4000 tons and a crew complement of less than 100 sailors.

Juho Lee 09 Nov 2021
On March 26 2010, the ROKS Cheonan was sunk by a North Korean submarine. Today, more than 11 years later, the Daegu-Class or FFX Batch II frigate which bears its name has been launched by Hyundai Heavy Industries (HHI).