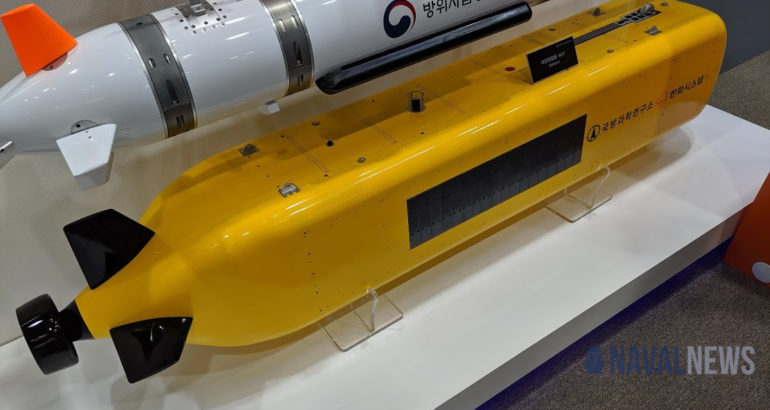 To hunt and detect submarines, it is fitted with an active sonar in the nose and two flank array sonars.

The ASWUUV is being developed for South Korea’s Agency for Defense Development (ADD). Its size is confidential, but according to a video on display on the Hanwha Systems stand, it will be able to reach a maximum depth of 300 meters and have an endurance of 30 days.

In its operational concept, the ASWUUV is meant to be used in conjunction with USVs, other UUVs and other sensors (from manned ships for example) meaning it can probably be used for multi-static anti-submarine warfare.

According to Hanwha Systems, the ASWUUV is still under development and is set to start sea trials in the middle of next year.

US Navy supports HII for UUV launch and recovery capabilities

Naval News Staff 27 Oct 2022
The US Navy and HII entered into a Cooperative Research and Development Agreement (CRADA) on UUV Launch & Recovery Testing.