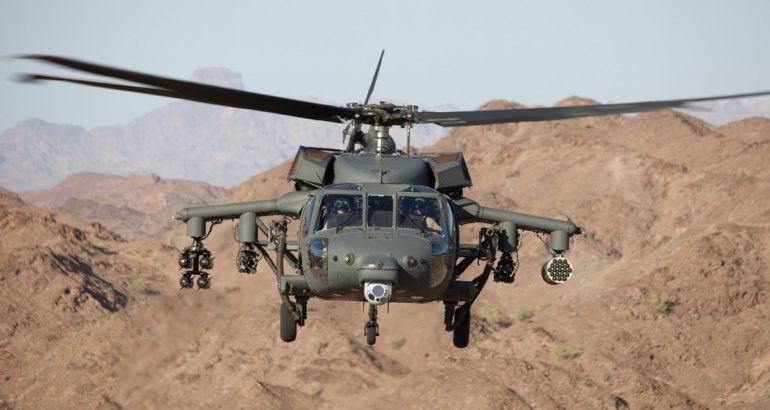 For attack and combat assault missions, the Black Hawk aircraft can be armed with an advanced weapon system that allows pilot gunners to place guns rounds, rockets and air-to- ground missiles onto the target with high accuracy.

The Black Hawk has been tested time and time again in harsh environments and challenging missions across the globe. Now, the world’s most versatile helicopter is getting a new option to help it make the world even more secure: meet the Armed Black Hawk.

Essentially, it’s an armed kit that can be loaded onto any S-70i/UH-60M Black Hawk to make it combat-ready. Five ways this addition to the Black Hawk family makes the world’s best multi-mission helicopter even better:

1- The armed kit adds capability to an already successful aircraft.

With the addition of the armed kit for Black Hawk, you can easily transform your helicopter into a combat-ready machine. When set up with an armed kit, a Black Hawk’s external stores can support a total of four weapons stations.

2- It makes missions easier for the warfighter.

This technology suite removes guesswork from aerial gunnery by enabling pilot gunners to place gun rounds, rockets and air-to-ground missiles onto a target with high accuracy.

The Black Hawk family of aircraft is one of the most deployed helicopters in the world. After 40 years, it operates in 33 countries across the globe in a wide variety of missions. The platform is tried and true, and the addition of an armed kit adds to the strength of this proven helicopter.

4- It makes it easier to hit your target with accuracy.

Fully integrated with the aircraft’s existing avionics, the system allows either pilot to place munitions quickly from forward firing guns, rocket pods and laser-designated air-to-ground missile launchers onto static or moving targets with high accuracy. It simplifies the complex task of placing rounds onto a target from standoff distances by calculating the complex ballistics required for effective airborne gunnery.

The installable armed kit is designed to boost any Black Hawk’s combat skills, at half the cost per flight hour compared to a dedicated heavy attack helicopter. It’s also a cost advantage to have a removable compact kit, as opposed to purchasing an entirely dedicated attack-only helicopter on its own.

Naval News Staff 22 Nov 2021
The future USS Marinette (LCS 25) was christened during a ceremony at Fincantieri Marinette Marine in Marinette, Wisconsin on 20 November 2021.