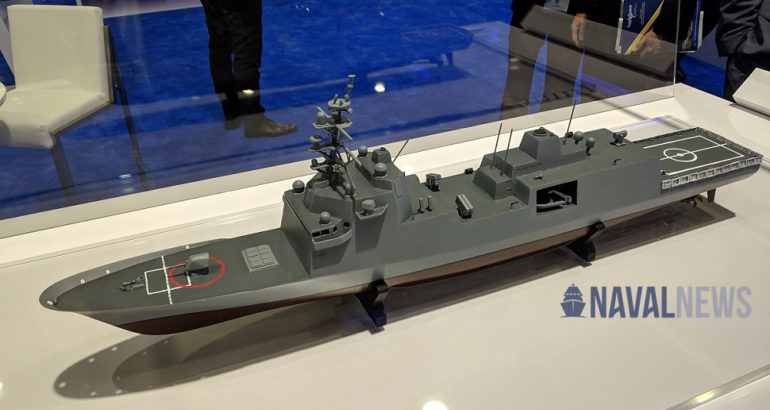 In the contest to build the Navy’s new class of guided-missile frigates, bidders are counting on power generation as the difference-maker as the service nears awarding a contract.

This story was originally published by Ben Werner, USNI News on January 9, 2020.

Though the Navy required bidders to base their future frigate (FFG(X)) designs on a mature design currently in use, the Navy also wants a hull that will be adaptable enough to keep up with future technology and warfighting needs for weapons, radars and more across several decades of service.

“We’re delivering this thing as it will be delivered to the government, generating 12 [megawatts] of power,” Hunt said. “If you want more power than what the ship has, I can put bigger diesels in there right now and give you another four [megawatts] of power.”

On the line is a contract likely worth more than $1 billion to design and build the Navy’s first frigate, with options for more ships in the coming years. The Navy received bids from Fincantieri and three other firms – General Dynamics Bath Iron Works, who will partner with Spanish F100-builder Navantia; Ingalls Shipbuilding; and Austal USA, builder of the Independence-variant Littoral Combat Ship. Hunt said he’s expecting the Navy to make a decision and award the first frigate contract in July.

“The first award goes to ship number one and the design. And then it’s nine more options for more ships. It’s not a guarantee that they’re going to give them all to the guy that wins this,” Hunt said of the ongoing downselect process.

All four firms are expected to showcase their designs at next week’s Surface Navy Association symposium in Northern Virginia, an event many of the Navy’s top civilian and active duty leaders are scheduled to attend. The Navy will own the frigate design, so it could opt to divide the future work among more than one shipyard.

The Navy’s Fiscal Year 2020 budget request included $1.3 billion for the first of 20 planned frigates. The Navy set a target of an $800-million per-ship cost for the rest of the frigate fleet, starting with the second ship.

Power generation is likely to be one of the Navy’s deciding factors when it selects a frigate, Adriane Stebbins and retired Navy Capt. Kevin Eyer wrote in the July issue of Proceedings. Their reasoning was simple: Navy leaders know technology and their warfighting needs are changing faster than new ship designs are developed.

“No modern Navy ship class has had its engineering plant changed out for a different or novel type midway through its service life. It would be easier and less expensive to simply build a new ship—the hull and the engineering plant are virtually inseparable. Consequently, on day one, these plants must be able to provide all power necessary to drive the ship and operate its systems well into the future,” Stebbins and Eyer wrote.

With the 12 megawatts generated by Fincantieri’s current power generation design, Hunt said the Navy would have the option to deploy directed energy weapons – such as lethal and non-lethal laser weapons, microwave and millimeter wave weapons and more – which are part of the Navy’s requirements.

However, powering directed energy weapons means making other adjustments on the ship, including diverting power from propulsion.

The trade-off of speed for directed energy weapon is not significant, Hunt said, as slowing the frigate’s speed from 28 knots to 24 knots doesn’t decrease the ship’s performance but frees up a tremendous amount of energy for weapons. These weapons, he added, are closer to being ready than most people realize.

“I think you can put directed energy on the second ship by time it goes into the water,” Hunt said. “Rail gun is not that far behind.”

The Fiscal Year 2020 National Defense Authorization Act adds a wrinkle to the Navy’s frigate contest. The law states the first frigates built under the initial contract award could use foreign-built engines and main reduction gears, but the rest of the anticipated fleet would be required to use domestic engines and reduction gears.

HII and Austal USA previously declined to comment to USNI News about how the FY 2020 NDAA affects their bids. A Fincantieri spokesman told USNI News in December that their bid would not be affected by the language.

Fincantieri has made several adjustments to its operation at the shipyard in Wisconsin to accommodate the Navy’s desire to build two frigates each year, Hunt said. The company has already spent about $180 million on improvements to the yard and plans to spend an additional $80 million to $100 million on capital expenditures if awarded the contract.

The company is installing a syncrolift to use when putting ships in the water. If awarded the contract, Fincantieri plans to build a hull-erection facility large enough to build two frigates simultaneously inside a climate-controlled facility. At 20 million cubic feet and 3.42 acres of floor space, the facility could contain two football fields and still have room for a marching band.

“Six or eight months ago, when I was talking to the Navy’s top leadership, I said: truth be told, I think we can make 1.5 ships a year,” Hunt said. “The unofficial guidance, coming from a couple of different places, was, we don’t think we like that.”