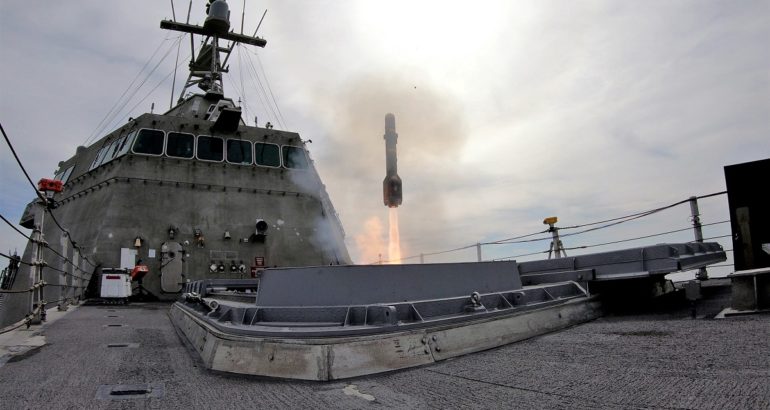 The Lockheed Martin booth at SNA 2020 features a full scale model of a Joint Air to Ground Missile (JAGM) with a sign reading “JAGM for LCS”.

Speaking to Naval News, a Lockheed Martin representative explained that the Longbow Hellfire missile currently deployed aboard USS Detroit as part of the SSMM is no longer in production (and has actually been out of production for a number of years).

The current stock of Longbow Hellfire ammunition available to the U.S. Navy is finite and will only be decreasing going forward. The natural replacement of Hellfire is the JAGM and Lockheed Martin hopes that the U.S. Navy will procure the new missile for both existing and future LCS of both variants.

JAGM has the same form factor as Longbow Hellfire and is fully compatible with the LCS SSMM and combat system. In order to take full advantage of the JAGM new capabilities (especially its semi active laser sensor) the combat system (COMBATSS 21) would require a software update.

The Surface-to-Surface Missile Module or SSMM is one of four modules comprising the LCS Surface Warfare Mission Package. Using Army Longbow Hellfire missiles in a vertical launch capability to counter small boat threats, SSMM increases both the range and the number of targets LCS can engage.

JAGM’s multi-mode seeker provides an improved Semi-Active Laser (SAL) sensor for precision-strike and a fire-and-forget Millimeter Wave (MMW) radar for moving targets in all-weather conditions. These new sensors have been integrated into the JAGM guidance section and mated with the AGM-114R missile bus and demonstrated during multiple guided flight tests.

JAGM has a range of 0.5 to 8+ kilometers (when launched from airborne platforms).

Naval News Staff 23 Dec 2021
The U.S. Navy took delivery of the future USS Canberra (LCS 30) at Austal USA on December 21. This is the second Independence-variant Littoral Combat Ship (LCS) Austal has delivered to the Navy in 2021.

Naval News Staff 22 Nov 2021
The future USS Marinette (LCS 25) was christened during a ceremony at Fincantieri Marinette Marine in Marinette, Wisconsin on 20 November 2021. 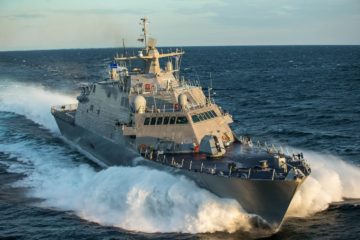